completing this little trilogy of Digimon dumps, we have... 2003 Digimom Sapphii! Or 2003 Digitmon Sapphire! Or something! By Sintax. 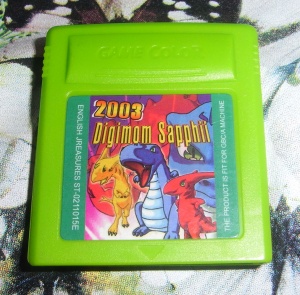 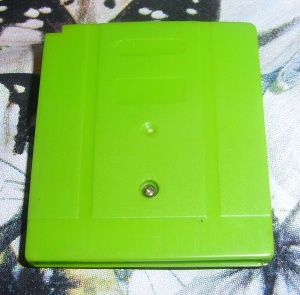 It's a clone of Super Mario Bros (specifically Super Mario Bros DX, but it seems to have been coded from scratch), and... it really doesn't have all that much to do with Digimon at all, aside from the "big Mario" replacement being the Agumon sprite from Digimon 9. But the small sprite is Bub from Bubble Bobble, so it's just about as much a Bubble Bobble game as it is a Digimon one. The intro doesn't mention Agumon by name, the picture on the title screen is a... something and even the label just seems to have some random dinosaurs on it.

anyway it's not a bad game - there are a few omissions from the real Super Mario Bros, notably the last two worlds, but it's mostly a fairly complete clone and it even has warp zones and stuff. Each level also has different graphics and music (the latter being stolen from Pokemon Pinball) which is a nice touch over the original. Sintax being Sintax they released at least two other basically identical games with different graphics, namely Harry Boy and Donkey Kong 5, Harry Boy being (I think) the first. 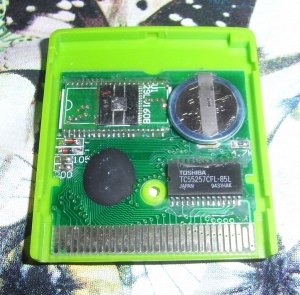 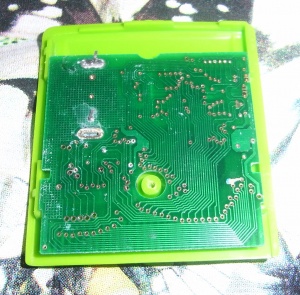 this is also the first Sintax game I've managed to get working, so yay for that! Unfortunately I had to make it 4mb for it to run, when the game is actually only 2mb, seemingly because of the way it addresses data, but I have no idea what can be done about it. (if anyone out there knows, please leave a comment!) I guess it uses some kind of slightly-unusual mapper or something, but I still have basically 0 technical knowledge of the Game Boy and I'm already punching way above my weight trying to crack these things in the first place, so I'm pretty happy that it's playable at any size.

also, thanks to RobGBA for lending me the cart! enjoy:

Looks like this was based off of Digimon Amethyst (or vice-versa). And that "thing" on the title screen appears to be the character Croc from some GBC and PSX games.

oh, hey, you're right! (on both counts). the Croc is basically the picture of Croc from Croc 2's title screen, only with a reduced palette. (also random observation but it sounds like GBC Croc 2's music was composed by the same person that did Telefang's)

Fun fact: she goes quite a ways back in the industry, having also composed the music for the original Castlevania and Moero Twinbee.

This is a very titful thunder indeed.

Not even on web.archive.org ?