The Tenth Day of Sintaxmas 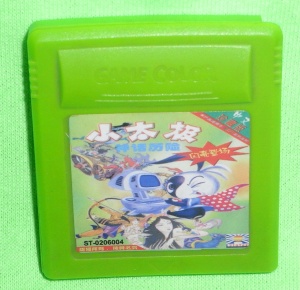 Now this is unusual. This game - called Xiao Tai Ji - Shen Hua Li Xian (小太极-神话历险) - is based on a Taiwanese cartoon by the name of Taichi Kid - and, so what? you might think. Sintax based games on tons of shit. But this game...

was LICENSED by the cartoon's production company! seriously! it's right here on the official website and everything!

The game itself isn't half bad either (although the music is stolen from Lemmings as usual). you should definitely try this one! There was also an English version called "Little Taichi: The adventrure of myth" which.. I'd quite like to find.

coming up tomorrow... Sdick is strong

Wow, a rare case of an unlicensed game (especially by an asian bootleg company) being official. Too bad more companies didn't follow this practice.

I think this might have happened through Gamtec - some archived copies of their website list a Taichi Kid game in development for the PC, which I don't think ever came out, so maybe in the end they farmed it out to Sintax and had them make a Game Boy game instead.

...Aren't those trees in the background of the first level from Kirby's Dreamland? Even if they weren't directly ripped, they look *far* too similar to be coincidence.

Ah, Sintax...being utterly bootleggy even when you have the proper license for something.

Also, curiously, the ROM has some graphics buried in it from Harry Potter. No, not the one that plays like Super Mario DX, which would at least make sense given the product IDs--I'm referring to the photo-realistic intro screens from the Potter platformer with Lemmings music.

In case anyone is stuck trying to beat a level, you must find the 2 Ying Yang symbols there and then talk with the big guy in order to give you a chest with a star inside, letting you access the boss.

@Taizou
You got the name of the game in Chinese Simplified. I think you need to change it to Traditional Taiwanese.

it's in simplified on the cart, traditional on the title screen. Sintax doesn't do consistency.

Does anyone know how to pass world 4. I am on stage 4 and i have collected everything i needed including the ying yang symbols. But it just won't let me continue on to the next level. If there are any cheat codes. You may provide please.