The Eleventh Day of Sintaxmas 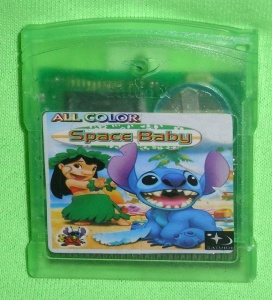 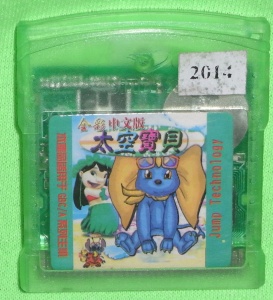 the next (ooh second to last) game is a cute little puzzle-ish platformer based on the Disney movie Lilo & Stitch. what's awesome here is I have both the English and Chinese versions to release today - this never, ever happens (except the one other time it might happen), so enjoy it! The English version is called Space Baby on the cart and "The Firmament Baby" in-game, the Chinese is called Tai Kong Bao Bei (太空寶貝) everywhere. But I'm just going to call it Space Baby for convenience because I like that name.

coming up tomorrow... Rocket Brigade, shuttling in the galaxy

Wow, this is...actually better than some of the official Disney games on GBC.

(To be entirely fair, I'm referring to the ones developed by Tiertex...but *still*...)

Also, I love how, on the Chinese cartridge, they tried to dodge the copyright police by replacing Stitch with a dodgy knockoff version thereof...and then left the smaller Stitch in the lower left corner completely unscathed. QUALITY.

Well good job for this dump one, i hope for other sintax games also pokemon carbuncle as i asked first and a other game i forgot

it always seemed weird to me that they even bothered to put that little Stitch on there in the first place, but I just discovered where that artwork is taken from, and now it all makes sense:
http://www.gamefaqs.com/ps/561072-disneys-lilo-and-stitch/images/box-51216
they were just covering up the Disney Interactive logo. of course.

oh and the one review of that game on GameFAQs basically accuses it of being a bad Crash Bandicoot knockoff. so, shit, maybe Sintax's game was *more* original than the licensed one? (except the music of course)

Oh nah, Lilo & Stitch for PS1 was definitely not like Crash at all. It was one of my favorite games at the time, and the only 'small' similarity is the kind of scrolling, I suppose.

@Taizou
Do you know where the music is stolen from?

@Taizou
Huh. Isn't it somewhat odd, but although making sense, that GameBoy bootleg game developers use and reference games and music from obscure GameBoy games. Like, Pokemon Adventure (and other Makon Soft Sonic games) - Antz; Pokemon Leaf Green (Sintax) - Parasol Stars. It would make sense, definitely at the time, they couldn't could use like Junichi Masuda's music with the official Pokemon games. Nintendo would sue the bootleg game companies (more so, at the time, in the early 2000s). Also, I wonder about the company name "Jump Technology".? Is that an alias for Sintax? Or could that be another company, co-developing with Sintax, around the time (I believe this might have been around 2004, or so.). It's weird that name isn't shown around with the other Sintax games, I don't think. I wonder if it is an alias to keep from being sued by Disney. Makes sense. Dangerous risk to present "Sintax" or "BBD", against Walt Disney. Maybe I should have also, not said this, to protect them. :_ Ehh, Disney's goons are getting more retarded these days, anyways. (Take that Disney! >:D) I mean look at fucking "Frozen", IT FUCKING SUCKS, REALLY BADLY. I don't even want to watch the next Disney movie, after that. OH GOD.

although the weird thing there is Sintax had no problem using Pokemon Pinball music everywhere, even where it was completely inappropriate (ie spiderman).

but yeah I think Jump Technology was just an alias for Sintax, they used a few different names sometimes (eg the English cart has "Saturn" on it), and it may well have been to avoid legal trouble .. but then their identity isn't exactly very well-hidden when the carts still have a Sintax logo moulded into them and most of the games still start up with a Sintax logo regardless, so I dunno really.