the twelfth day is finally upon us... and today I'm bringing you something I think quite a lot of people have been waiting for. a game I actually played through to the end because I legitimately enjoyed it that much. It's a strategy game, more or less based on Super Robot Wars gameplay-wise (also the music is stolen directly from the second GB entry in the series), but featuring characters from everyone's favourite monster franchise(s). And I have like four variations on it, so let's take them in order: 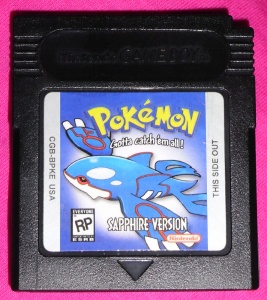 This is the first version I played, and probably the original. There's lots more info, along with pics of the box and stuff, here. This version actually seems to have been published by a company called "New Game Color Advance", using art straight from the official GBA Sapphire, as opposed to Sintax's usual ... idiosyncratic approach. (but don't worry, the next version has plenty of that) 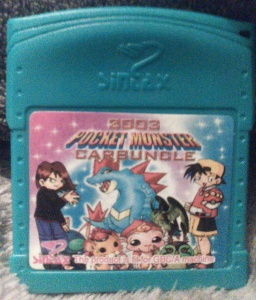 Well we have Sapphire, so obviously there has to be Ruby too... Or Carbuncle, as Sintax prefer to call it. The title screen and some of the stage graphics are different, but I think everything else is the same as Sapphire. I suspect this one was made after Sapphire, though, if only because its title screen is fairly shoddy-looking compared to Sapphire's nice one. Qiezei has a bunch of scans here. 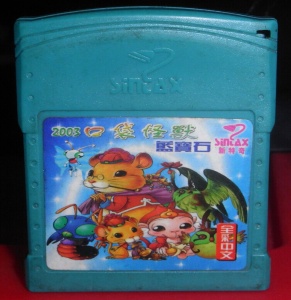 The Chinese version of Sapphire - seems about the same, aside from being in Chinese.

I should note that I wasn't able to get a consistent dump of this one; my first dump worked, but all the subsequent ones didn't, so I can't verify whether it's a good dump or not. 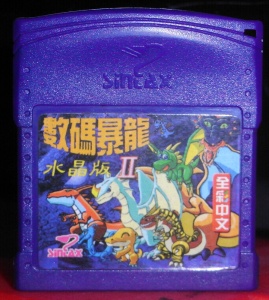 and finally.. the Digimon version! Basically the same thing but with different graphics. Strangely they bothered to redo the stage graphics again, but still left a few Pokemon and Pokeballs and other Pokestuff in the game. In one of the screenshots you can even see a Pokemon centre that they added into this version.

and so it comes to an end! this isn't the end of Sintax though. not by a long shot.

I'm going to bow this down NAO! :D

Both the Pokemon Ruby and Digimon ROMs contain the Pokemon Sapphire title screen, but Sapphire doesn't contain any of the others. So your theory about the release timeline seems to have some evidence backing it up.

Amazing! Will play the s*it out of them n_n!,Thank you so much!

@4 - I can't reproduce that, it works fine for me. Which emulator are you using?

Replying to the 4th post - it worked fine on VBA 1.7.2 and GBC.emu, which is based on Gambatte.

Replying to 7th post - I'd recommend GEST or Gambatte QT for that one. Same with a V.Fame game (Soul Falchion), it crashed on VBA so I had to use GEST in order to beat that game.

Yeah, GEST seems to be better for unlicensed games in general.

Thanks very much Taizou for working so Hard To dump this stuff. This one of my favorite sintax game ever developed

CAN THEY MAKE IT OUT IN A WHOLE SKIN?

wow dude, thanks for posting the dumped ROMs! I bought this on a holiday in Florianopolis, at the public market... the game got broken somehow and the gameboy couldn't run it anymore... it was so fun to play!

Taizou i am interested if there is a english translation of the pokemon ruby game please.

"Boss, just finished "designing" the label to put on our new Pokémon Sapphire Bootleg"
"Great job, though something seems off."
"Oh yeah, I forgot to put an ESRB rating, don't want the American authorities busting us for selling an unrated game. Besides people will suspect it's fake without a rating."
"We don't have time to get it rated properly, so just put Rating Pending on it."
"Great idea boss, your genius is shining as always."

But there's no rating at all in the Carbuncle bootleg!

I bought this one (Carbuncle) in 2005 at booth in Turkey while on vacation. Crazy to replay it now as I didn't knew English back then