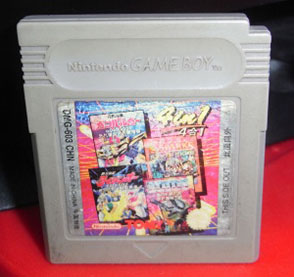 well I covered this in a post a while back, and now it's dumped! ah the wonders of technology. or something. I dumped the menu and BigFred reassembled it using the existing Japanese dumps of these games (as the versions on the multi are identical to the standalone Japanese releases).

To quote BigFred, since he can explain it better than I can:

As you can see the global checksum is correct - actually this is the same as the other Mani/Taito Pack where the single ROM-images are just stitched together in a certain order. Now let me explain: A real MMM01 ROM-image does have the ROM banks including the menu at the end of the data rather than the start as other mapper games. This is not just speculation but was verified by a raw dump done by The Guru (MAME). We also received information about this matter from the dumper toshi77 who provided a few details about the MMM01 together with his dump of the Taito pack. MMM01 maps these pages as the first pages on bootup. This means most emulators will just load the first game and you won't see the menu at all. The only emulator that currently handles the MMM01 correctly is the french emulator rew. If you load the Taito pack into it you will get the menu and each game can be correctly loaded using the accurate "header at the end" raw image. However the Mani games do not have a correct header setting to MMM01 which rew uses to initialize the mapper. On real hardware this is not needed of course but on emulators you won't get a correct result.

btw, sorry to anyone who's been waiting for this!

Is there any chances to dump the DMG-601 version?

I don't have that one. sorry!

@Taizou
Could you dump the 銀版中文RPG戰略+動作+益智12in1 [Silver Version 12-in-1] cart, menu only, if you have it? Or at least, a multicart with a menu like that?

technically i already have dumped it - the menu is actually buried in the Shi Kong Xing Shou ROM.

@Taizou
By the way, speaking of which, with I said that I've gotten better at programming on that long-ass post, I've made MUCH more better fixes of this multicart, just of header. So I will release them soon. I would really appreciate if you could replace your ROMs of the header fixes with mine. Trust me, I mean these much better fixes.

@Taizou
I forgot to mention, I've actually made hacks of this multicart, however though, I kinda need your help to fix them, when I upload them on the internet.

how are yours "better"? the ones I've uploaded were made by BigFred & he knows what he's doing.

@Taizou
Just trust me, you'll see that these are good fixes. ;)

I found that MMM01 emulation in BGB need to move the Menu Bank to the file header(i.e. Address 78000-end move to 0000), BGB will set the Bank Number to the correct value while menu switch to game.

Oh, [Menu first] with Header set to MMM01 can work directly on BGB.