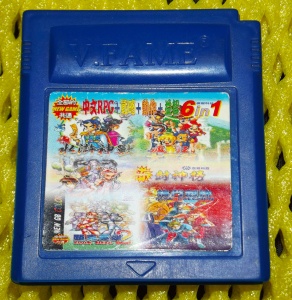 hey it's that time again! once again thanks to Qiezei and one of his fantastical multicarts I'm bringing you another Vast Fame game: Feng Kuang Da Fu Weng (疯狂大富翁), which you could possibly translate as "Crazy Richman" or "Crazy Monopoly" (Richman is a series of popular Taiwanese PC games kinda loosely based on Monopoly, they both share the 大富翁 name in Chinese).

Its sequel has been dumped for a while, but this one has a bigger ROM and consequently a greater variety of events and stuff, despite having fewer characters. I can't exactly get the most out of this not knowing Chinese, but it has a ton of charm and there are a bunch of little self-referential things in there and the music is great and you know. after 10000 mediocre Sintax games this is the sort of thing that makes it all worthwhile for me.

two ROMs this time, the "header fix" version sets the header correctly to allow saving in emulators. and please note there seems to be a bug in the game - I don't know if this happens on the real cart, but if you go to create a new game, then reset before you've finished selecting your character, it will probably corrupt your saves. so don't do that.

Gameplay note: each character has their own special abilities (or at least most of them;) for example the green-haired fellow can roll a seven and the kung-fu girl can randomly stun the demon spirit for a turn if he's following her.

This is VEEEERY amusing. XD

also Qiezei pointed this out in the description of his video @ https://www.youtube.com/watch?v=g-OEgGMVQX8 but some of the music is from Pocket Monster 2 for the Mega Drive - the title screen is its Stage 3 & the winter board music is its title screen.
also also the header name in this rom is "POKMON'FIGHT" which doesn't correspond to any known Vast Fame game. so weird pokemonness all round.

"POKMON'FIGHT" eh? xD Maybe they were planning to port Pokemon Stadium to the GBC? (which would've been awesome if they did. ;) )

also @Rob yeah that kinda makes sense! Pokemon Stadium on the Megadrive recycles some music from Pocket Monster 2 too, so maybe they were planning some kind of GBC version of that... maybe it ended up being fleshed out a bit and turned into Digimon Pocket/Pokemon Ruby.

what the diference of this and the dumped version?

this is the only dumped version that i know of.

@Arshes - only the sequel was dumped a long time ago. This is the first dump.

@Smedis2 Believe me, we've certainly been trying to dump Zook Z. We have at least two people working on bypassing the protection and I've sent several different carts featuring the game for dumping. That game is unfortunately just being a bugger to everybody (and yes, you should be enjoying this game because it's awesome.)

Also, the idea of Pokemon Ruby/Digimon Pocket being V.Fame's attempt at porting Pokemon Stadium makes sense, especially since it's set up very similar (and probably had the same/similar staffers as well working on it.) Sorry if any of this sounds obvious.

Lazy me got around to seeing if that save glitch happens on a real cart, and it doesn't. If you don't finish selecting your character, the save just remains blank. I tried it on my multi and single cart.

ooh okay. I'll have to look into that. thanks!

I've tried it in a few different emulators using different RAM sizes and the same thing happens.. So I dunno really. Might have something to do with the way their mapper initialises RAM vs the way emulators do it. If you soft reset in an emu you'll sometimes get messed up background palettes in the opening scene with the dice, which may or may not be related.

@Qiezei - that reminds me of the XFSB saving corruption after starting a new game from scratch.

AFAIK most V.Fame games suffer of that issue.

I'm not sure if the XFSB save thing is a glitch or just an obnoxious way they programmed it. It's one of the only games to do that oddly enough but still.

@Taizou
You need to do more than a header fix for this game. Because it seems like the save select screen makes the game crash.

Which basically means VF like always does amazing things, perhaps even better than the actual game. #VF