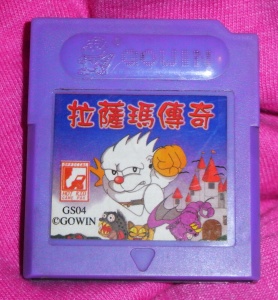 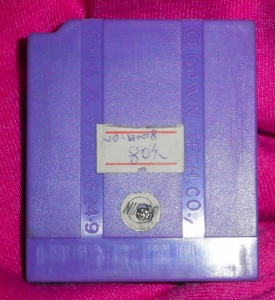 Hey it's another dump! Well I never. Presenting the long-lost (not really) mono Game Boy game: STORY OF LASAMA (拉薩瑪傳奇). It's a fairly generic little platform game, developed, I think, by some people connected to Vast Fame (although they seemingly hadn't gained a decent musician at this point) and published by Gowin, a Taiwanese company who released about 17 games total across both mono and color Game Boys. (If you want to read some more about this game, and you know Chinese, this here archived page on Gowin's old website might be a good place to start)

Five of Gowin's other mono games - Rainbow Prince (which is excellent), Fire Dragon (which has excellent music), Prince YehRude (which is weird), Magic Ball (which is a thing) and Lost Trip/Losing Trip/Puzzle Path/Mi Tu De Lu/Top Secret (which has too many names) - were dumped and cracked by one "GYY Game Unlock Team", who also saw fit to hack their own name into the games - I've done no such thing here, so you can enjoy the game in its unmolested glory. The raw dump is 4mb 128kb and contains a good chunk of Magic Ball, for some reason, but the fixed version is a mere 64k and actually works and stuff. 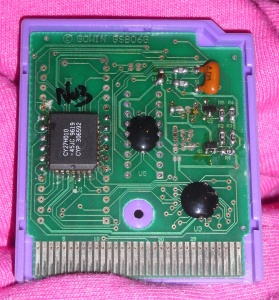 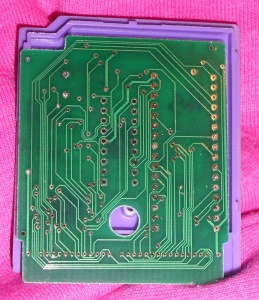 Incidentally, this is numbered GS-04, and while GS-02 and up are accounted for, I've never seen a GS-01 and neither was one ever listed on Gowin's website. the fact that this one's PCB has "No3" written on it in black marker makes me think there never actually was one (or if there was, it was cancelled) ... But you never know.

Although there's no copyright date, I'm pretty certain, given the ROM's header title, that Story of Lasama can be dated to somewhere around September 20, 1993.

well, quite often the actual release happens months after programming is complete (e.g. because the manufacturer is slow in producing the pcb or the cart)

or they have reused portion of the earlier game (Lasama) in the later ones, including the 930920 string

hard to know without contacting someone involved in the programming

overall, thanks a lot for the dumps

When you boots this on a real gameboy does it display a Nintendo logo or a Gowin logo?

Gowin. It also doesn't work on a GBA (not sure about GBC, I'll have to double check. It does work on the "GB Boy Colour" clone though)

Thanks, then they were using one of the 'evil' nintendo logo overlay tricks to display their own logo but still make the cart pass the unit's nintendo logo check. Several Sachen carts seem to use a similar trick.

Yeah, lots of unlicensed games do, I wrote something about it here:
http://fuji.drillspirits.net/?post=87

(Also just for the record it does work on a real GBC. A few of Sachen's mono games don't, which is why I was checking)

forgot to tag my nick with that last post ;)

My dump of Super Fighter S also happens to have that GYY logo in it.

I love this site thanks for posting this