Hey I pulled something together at the last minute because it's CHRISTMAS
Four dumps that have been on the backburner for one reason or another but not anymore. merry everything!!

This is the original 2003 release of Sintax's Castlevania game, probably best known through the cut-down demo of a somewhat-revised "DX" version which has been spread around the internet for a long time. Unlike the DX demo, the full game is here, and it's pretty much a Metroidvania-style Castlevania game on the Game Boy Color, which Konami themselves never attempted. In fact, from the small amount of it I've played, I'd say this is better than any of Konami's official Castlevania games for the Game Boy. The soundtrack is taken from Belmont's Revenge, which was a very good call.

Thanks to AprkMk10 for lending me this cart!

This is one of Sintax's later low-quality generic platformers, unfortunately. Pick Knuckles, Sonic or Tails and jump around a few uninspired levels shooting at enemies. I don't know how to use the icons along the bottom or the MP gauge, if they're even functional at all. Still, at least the sprites are decent.

I have a picture of this one, please enjoy the full glory of "Sonik" the probably-not-legally-distinct-enough hedgehog: 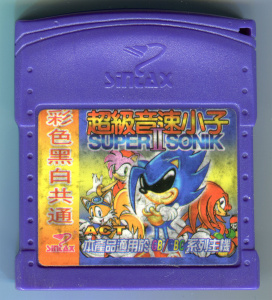 Here's an interesting one! An English version, for starters, which is rare enough. But an English strategy RPG, too, apparently based on the rarely-officially-localised Langrisser series (which I have never played). But it's actually more readily obviously just a reskin of the unlicensed Fire Emblem GBC game previously published by SKOB, with the Chinese intro text, gameplay, music and map layouts all being identical. All the graphics have been changed and characters and in-game dialogue replaced, though, which I assume results in a confusing mashup of Langrisser and Fire Emblem which probably makes no sense to fans of either series. Fun times in Sintax land!

Thanks to BigFred for this dump! (Which was sent to me so long ago that I can no longer find any of the original messages, so hopefully I haven't missed anything here.. ahem)

The reason I never released this one before is it wasn't quite susceptible to my usual method of cracking Sintax games- unlike 99% of their GBC titles which initialise the protection at the start and then never touch it again, this one actually does it again when you open the menu in battle, meaning the data is encoded in two different ways in different parts of the ROM, which I could never be arsed to unpick. So, for now, I'm only releasing the GBX and raw versions, for use in hhugboy and probably MAME too.

The Chinese version of the above game. Basically the same, but in Chinese. Same protection issues too.

nah "Castlevania EMO Demo" is just the ROM name for the demo version in GoodGBX... and it was pretty much pulled out of someone's ass like all GoodGBX names for Chinese GBC games

Super Sonik II feels like some kind of transitional state in this particular series of GBC platformers from Sintax.

Unlike a lot of the other games sharing this engine (e.g., Kou Dai Yao Guai - Bai Jin Ban), this one uses music from Parasol Stars instead of Lemmings. That's also the case with Pokemon Leaf Green (https://youtu.be/hHhLckw3Dm8) - but the devs figured out how not to make the sound channels glitch out after every attack in that one.

Pokemon Leaf Green also removes the seemingly useless icons in the lower right which are seen in Super Sonik and the previous games (though not the MP gauge, which seems to be equally useless?).

...ohhh, I see what happened. The attack sound effect works perfectly fine for Knuckles, but not for Sonic or Tails. I guess Sintax remembered to update the pointer for Knuckles' attack sound, but forgot to change it for the other two characters...

And I just realized something that throws a wrench in my original theory about the order of the games' releases. I could've sworn Sintax's Incredibles platformer (https://youtu.be/dPqiCk5n-AI), also based on the same engine, had the icons in the lower right, but it doesn't - despite using the music from Lemmings instead of Parasol Stars.

'Emo Dao Cheng DX' is also dumped in its full version. I remember when I found it on a Chinese blog and backup'd the ROM back in 2013 or so.

Hey, is there any chance you'll make an English patch for the cracked version of that Metroidvania-style Castlevania game? If it's anything like certain other Metroidvanias, being able to understand hints on where to go or what to do next would be helpful. I seem to remember that you did something similar for one of the Harry Potter bootlegs, so it's not like my request is coming out of nowhere, though I can understand if you want to focus on other things.

By the way, I checked out that reskinned Fire Emblem game, and as someone who played Shadow Dragon, I think it might just be a straight-up port of the first game. That first map is incredibly similar to the first map of the first game: https://fireemblem.fandom.com/wiki/Marth_Embarks

With that said, the game's second map might be original, as I couldn't find anything *too* similar given a cursory glance at Shadow Dragon's maps.

Is this blog still active...?

Imaynotbehere4long, so you simply PLAYED it, you don't all bout it...

@guyzis Well, I also beat the game, so I'm pretty sure I've seen most of the game's maps. Plus, I went to the Fire Emblem wiki and cross-checked the bootleg's map with the wiki's screenshots of Shadow Dragon's maps, so I'm fairly confident in the validity of my previous statements. Of course, there's always a chance the bootleg's map was copied from another Fire Emblem game...

Sorry for my stubbornness, mind ya...

You know what I've always wondered... how many of these bootleg games have actually been beat.

I mean, some are pretty easy to beat, give or take a few hours of repetitive gameplay, but a good majority of them are extremely obnoxious and near impossible.

Well, Josh, KAGE has been doing a nice job finishing them so... most of them?

Heck, it's been two YEARS and this blog is stand still. Might as well get shut down.

@guyzis
Yeah, I still do my job of completing them, this time I'm recording longplays of them for WoL (hint: the people behind the cubex55 YT channel).

Why ban me? lol