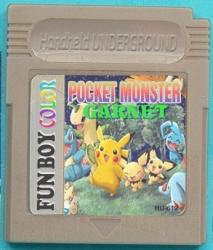 Oh ok I'll probably visit this site often as bootlegs from the gameboy line are my favorite so I hope to see more games and updates soon.

@Taizou
LOL! How did you make that image of that cartridge? :D

@Taizou
One hack that I made of the Mani 4-in-1 multicart was a robot warrior fighting pack, and note this parodied Japanese/Chinese Engrish on the title of the multicart: "Supar Robotao Woruriar Figheting 2 in 1". What do think?

@Taizou
Speaking of obscure games, what about Josh Bender's games, like "Dr Goo"? (LOL.) Although, Josh Bender's games, I don't think, are bootleg, just really obscure. Dr Goo is pretty much his main series. If you're wondering, like some people who remember it, I used to play ALOT when I was child. :) :D I mostly remember "Dr Goo 2 - The Plague". Funny thing is, I swear *I* was the one who made it become more popular on the internet, around back when I was Chowdit (on YouTube), instead of Chowdit1, and probably still, I am. Yay me! :D Of course, the way everyone played it back then before more of the internet, was on a Multi-CD pack called, "100+ Great Games" Even more so, this CD could *seem* somewhat like it's bootleg, but it's not. Especially, with how *I think*, I'm not sure completely, over the years with so many copies and versions, I've tried to get back, from my old first copy and/or version cracked, is that it seems like, at least, if I remember with other copies and versions, is that it has less than *even* 100 games. It's more like 50, to 51, to 52, or so. >_> Seem like a bootleg? Hmm? <_< >_>

oh yeah there were tons of cds like that full of public domain/freeware/shareware software, they had close enough to bootleg production values in many cases but they weren't breaking any laws. like the dvds you get of like 1930s cartoons that have fallen into the public domain, quality-wise a lot of them look like bootlegs but it's legal.

Just a note for some reason showing the fake cartridge artwork reminds me we still have yet to dump the graphics hack of harry potter ii by skob called chikorita platformer.

gowin will release 25 waixing color titles on 25th of january tomorrow. ///this is just a quick sample quote I wrote down÷÷=÷

are you dead or something? ;-;

taizou I used a time machine to travel 8 years in the past and say that you're awesome :)

please don't do that