I've launched a new site today at supermulti.org - It's more or less going to be a blog covering Chinese/Taiwanese unlicensed & original gaming stuff like Handheld Underground was originally intended to be, only with a broader scope (ie not just handhelds) and probably without the ROM and emulation stuff (which I'll still do here, since that's all I've used it for in about a year anyway). have fun!

I've just added a new page to the site indexing all the dumps I've released so far, including emulator compatibility info; should be an easier way for people to find something they're looking for rather than clicking through five pages of blog posts.

It also serves as a place for me to list undumped games I'm looking for, so hopefully if someone owns one of those games and is searching for info about it, they might find my page and get in touch. (Also if any of you can think of any other rare/unknown/undumped games to list there, please leave a comment!) 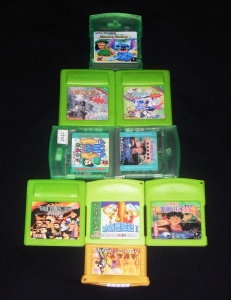 hey! well! I have a bunch of Sintax stuff sitting around now and I've worked out I can just about stretch it over twelve days, so... what to do with it? given the time of year there's only one thing I *can* do.

starting tomorrow I'm going to kick off the 12 DAYS OF SINTAXMAS - a new Sintax dump every day until Christmas Day! hopefully!

(okay technically the twelve days of Christmas are Christmas and the eleven following days, not the eleven leading up to it, but this isn't Christmas! it's Sintaxmas.)

coming up tomorrow... how to unify China by beating people up.

I've just uploaded some new stuff to the Handheld Underground youtube channel which hadn't been updated since a few months before this site was launched - I guess some of you might not be aware that it actually exists at this point. So, have some videos! These games are pretty obscure even by my standards.

Also, judging from my stats I have quite a lot of visitors from China and Taiwan, which is cool, since that's where these games were actually made and all. 你好 to all of you! I know people in China may have trouble accessing Youtube, but I'm planning to do something about that in the near-ish future...