This was never supposed to happen! The hhugboy project was never supposed to go on this long. I never wanted to be an emu dev at all; this little fork was a means to an end, a way to get these games playable somehow at a time when Game Boy emulation had stagnated. Of course, Game Boy emulation has long since un-stagnated, hhugboy's limitations and inaccuracies only became more apparent with the passing years, and the idea of knocking it on the head and contributing future mappers elsewhere has been floating around my useless brain for a fair while. But, well, I'm a creature of habit, it's easier to just shove more mappers into the framework I've created to keep getting these things supported, and so it has persisted.

Meanwhile. An experimental idea I had a few years ago, of bolting gblinkdx to hhugboy, in order to proxy mapper/protection-related reads and writes through to an actual cartridge, actually worked and I did indeed get a few unemulated games running using this technique. For gameplay this is pretty useless; not only is it dog slow, but its requirement of a very rare game cartridge plus a specific combination of obsolete, modern and custom hardware renders it inaccessible for most. Its true value is as a reverse engineering technique - by observing the reads and writes done to the mapper as the game runs, it becomes much easier to figure out the logic behind what is happening, and then in theory you can proxy less and less through to the real cartridge, replacing it with emulation, until eventually the cartridge is not required at all.

That unholy fusion leaves hhugboy now in the position of being one of my key reverse engineering tools as well as a functional emulator, so it's gained a new lease of life that way and become a little bit harder to shake off once again. Sorry about that.

And, naturally, all of this means I'm releasing a new version today, version 1.4.0.

This includes hooks for the gblink integration, but I haven't directly embedded the whole thing into the emulator for various reasons (mostly licensing), instead hiving it off to a library called libgblink. I've also overhauled the visual rumble feature, fixed some issues around saving (notably in MBC2 games) and made a bunch more behind-the-scenes changes mostly to clean up mapper-related code a bit.

But, don't worry, this isn't only a bugfix and self-indulgent fuckaround release. There is one new mapper supported in this version, the first I was able to implement using the gblink technique. And it's a big one. This is the one I've been waiting for for YEARS. I won't name names until the ROM releases though. I mean obviously you can find out if you want to, but it won't be written upon the official HHUG Blog Scrolls until Next Time...

Yesterday I found a couple of issues related to the games I released in my last post. Basically: If you use a bootstrap ROM with hhugboy, it (should) emulate the custom boot logo (replacing Nintendo's) for games that use one. However, that behaviour was broken for the mapper used by those games due to an error in my implementation of it, meaning the logos would appear inconsistently or not at all. Additionally, some PCB variants for this mapper (relevantly, the one used by Digimon Sapphire) do not actually display a custom logo at all, which I hadn't accounted for.

So I've done the following:

If you're not using the bootstrap ROM this isn't too relevant, but I'd still recommend redownloading the updated Digimon Sapphire GBX file for the sake of propagating the more accurate version.

It adds support for 2 semi-obscure mappers covering dumps which will be released sometime soon, and also tweaks save file loading to allow undersized files to be loaded (since switching between unlicensed compatibility modes can change the RAM size & the previous behaviour would cause your save file to be overwritten). 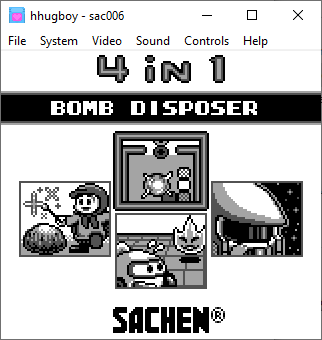 Adds a memory searcher function to make it easier to find memory locations for cheats and such, plus adds support for protected versions of Pokémon Diamond and Jade.