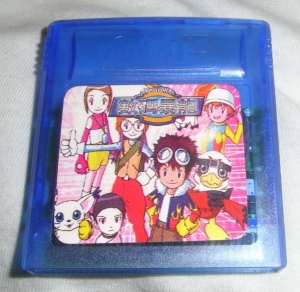 got a quicky release today - this one is an alternate version of a game that has been dumped for a long time, Digimon 3: Crystal Version (Shu Ma Bao Long 3 - Shui Jing Ban, or 數碼暴龍3-水晶版) by Vast Fame. The existing dump uses music from another Vast Fame game, Shui Hu Shen Shou, which also for some reason leaves it with an oddly silent intro and title screen, but this new version has an entirely different soundtrack and comes with characteristically excellent music for both. Other than that, I can't see any differences between them (not that I've looked or anything). Aside from the subtitle, this version also seems to be the same as the currently not-successfully-dumpable Taiwanese release (presumably the original version of this game) called 數碼暴龍3-超夢版, which could be translated as, uh, Digimon 3: Mewtwo Version.

As with Digimon 9 the original dump is too big but works fine, the fixed version is trimmed down to its correct size and the header updated to match everything is fine so just download it. It comes from a generic modernish-looking cart made by I don't know who, but presumably they had access to this alternate version from somewhere. Many thanks to Qiezei for sending it, anyway!

just a heads up - apparently this game sometimes crashes in VBA-M.

I'm going to cry tears of joy now that I can hear the intro music fully.

nope sorry. There is an official English version but its not dumped

Digimon Pocket
Vast Fame
A hack of Pokemon Ruby. There is a revision released on single cartridge only which uses Tai's sprite which matches the palette. A multicart version swaps the music from Pokemon Ruby with music from Digital Monster 3 by Vast Fame instead. This version has a bug where one Digimon is overpowered than all the other Digimon in the game.

really need an english version... any1 have a link to the english rom?

english version isn't dumped yet, sorry. i have it but haven't been able to dump it

i been wanting to know what the actual rom name is called? and if there is an english translation of it cause i dont understand japan

It's in chinese, not japanese.

That would be Digimon Ruby (not to be confused with the gba title). It is pretty rare and currently undumped. I have some ideas on how I am going to get a copy myself, and if it goes well, then I'll be sure to mention where I got it.