THE KING IS BACK

The year is 2003. We've got three hours and twenty minutes to spare, a regrettably gigantic cinema Pepsi, and an appetite for a fantasy epic. Of course, there's only one thing that'll do... 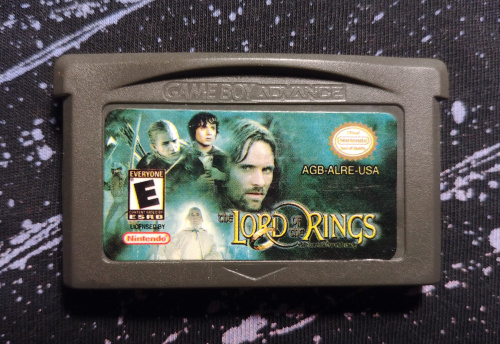 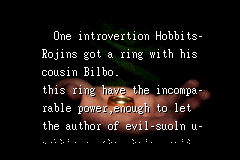 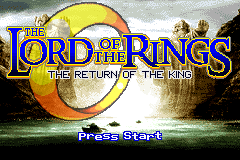 If you've been around here a while, you may already recognise this: it's the English version of Vast Fame's Mo Jie Qi Bing! That's right, the TRUE king has returned! 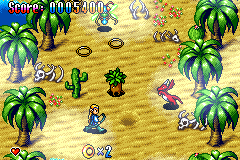 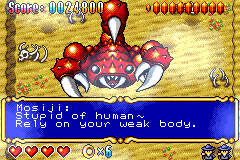 Yes!! It's not a Sintax game! It's a good game! A real game! A game that's not just a graphic swap of another game! A game with original music and graphics that's coherent and makes sense and isn't broken! This is SUCH a breath of fresh air. 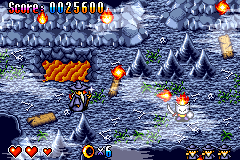 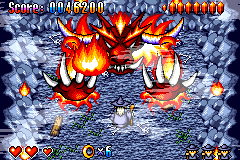 From the title, we can probably assume this was released after the official Two Towers GBA game, but before the official Return of the King game, giving it a release window of somewhere between late 2002 and late 2003. Sadly, this meant it had a pretty short shelf life, and makes it super hard to find today, since it has the same title as the much more widespread (and widely-pirated) official game. The giveaway is that the cartridge and box use the Lord of the Rings logo from the earlier, book-licensed Fellowship of the Ring GBA game, coupled with imagery from The Two Towers posters. 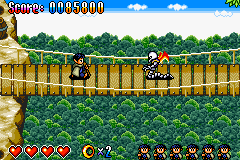 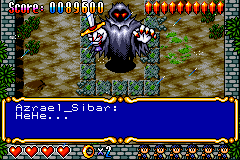 It almost feels unfair to hold this up against Sintax's GBA games, because the difference is SO vast. But I'm gonna do it anyway. This is a game with five playable characters, each with unique upgradeable attacks and special moves, 8 distinct levels, most with two sub-levels, 8 unique bosses each with dialogue, a mini-boss, a raft stage, weather effects, cutscenes, tons of great music tracks... and most importantly, it's actually fun, and well made, and doesn't have any showstopping bugs. It's just on a completely different level. 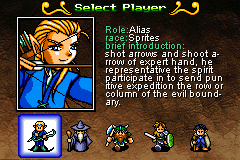 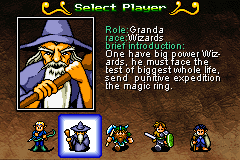 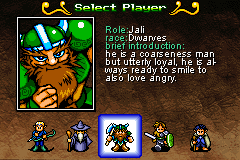 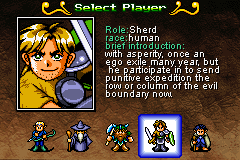 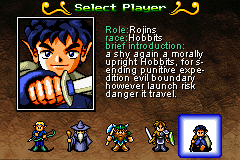 All the playable characters have modified names from their LOTR equivalents - this is the same in the Chinese version and was deliberate, they didn't just mistranslate them. This seems slightly redundant if intended as a legal dodge, since the English version just straight up uses the "Lord of the Rings" title, and both versions are stuffed full of movie stills and promo shots. If it wasn't for that, it honestly could've passed as a separate (very loose) adaptation from the books, since the hand-drawn character illustrations and sprites don't much resemble their film counterparts either. 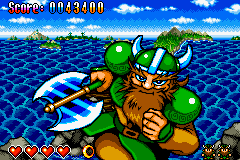 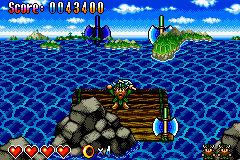 Now, I have to mention one thing here: they didn't build this game completely from scratch. The engine actually comes from the GBA game Kiki Kaikai Advance (aka Pocky & Rocky with Becky), and was apparently obtained legitimately by Vast Fame. But this is no simple reskin - almost everything has been completely redone and expanded. I would say it even looks better than the original, with more detailed, colourful graphics. Is it a bit jankier in places? I mean, yeah! But, you know, the pressures of this kind of under-the-table development inevitably means some corners have to be cut. They really didn't cut many corners at all, though, and even... added corners of their own, in places. Like the raft stage, which, interestingly, resembles something that existed in the SNES Pocky & Rocky, but never made it into the GBA sequel. So, it seems Vast Fame even paid a little homage to previous entries in the series that gave them their engine. 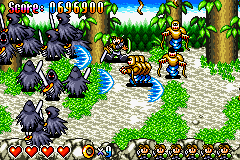 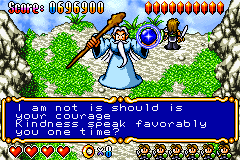 That's really the kind of care and attention that set them apart from their contemporaries. They were making, essentially, a black market product, destined to be sold cheaply and anonymously - they could easily have just phoned it in, jacked some sprites from the previous LOTR games, dropped them into Pocky & Rocky and sold it like that. No doubt they would've been paid the same. But they didn't! They made something which can more than hold its own against the GBA's licensed library. That's pretty remarkable. 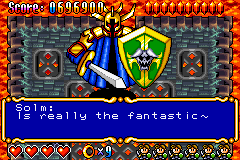 As per all copy protected Vast Fame games, this will only work in mGBA, specifically v0.7.0 or later. Enjoy a decent game for once!

Download: The Lord of the Rings - The Return of the King (Unl) (Eng).zip 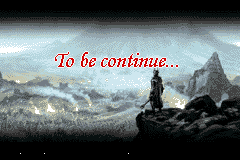 Cool, thanks for dumping this

Wow...this looks right up my alley...thanks!!

This is by far the most faithful adaptation of the film.

I remember seeing yy小龙虾 post a picture of this thing's box on his twitter and just assumed it was another Sintax game. This game is awesome, thank you for dumping it

@anewkindofscience@yahoo.com
Actually not. I found this game by accident and shared it with Taizou.

I remember to play this game some year before (NOT on hardware), and I quite like the gameplay, but I finally see the English version dumped! Yay!
Now waiting for the last undumped Vast Fame GBA game, some Super Robot War game...

Oh cool. You mostly find games in China right? Do you frequently find English language games? In my experience those are more common in South East Asia

@anewkindofscience@yahoo.com
English version games are rare in China. I bought this game from Russia then.

Neat. Thank you for the info

This and Rockman & Crystal were for many years the saint grail of the undumped games, thank´s Taizou, you are the best dumper of bootleg games in history.

Are there any Sintaxmas 2020 special?

Howdy taizou. A long time ago I had heard of a SKOB game that members of PGC suggested resembled Good Life's games. It's called "怪獸總動員" or for the English release "Pokemon Pocket Monsters Action" or "Monster Collections Plus" on its title screen. I was curious if you knew whether or not the two games had any relation. Thank you for reading and have a nice day

This may seem like a dumb question, but what is Liebao Technology? I saw that your emulator has a copy protection mode for them, but I have never heard of them outside of your emulator. Are they a multicart manufacturer or something?

it's a company that made mostly Chinese translated carts (their logo is a panther), but the English DBZ one has the same PCB type so I think they were related

@taizou The one made by the people who translated the first telefang games? I think you once said those guys also made those NGCA releases, am I thinking of the right company?

nah the NGCA/Telefang company is a different one, I don't know the name of that company

Ah, thanks. I'm making a Gaemboy bootleg company family tree diagram, so that is good to know for that

Hey taizou (or anyone), care to check this particular Zook/Rockman DX2 game below:

@ankos
Personally, I hope it is one of the Zook variants that isn't yet featured on this site.

The sequel, Zook Hero 2, in one particular version is called Rockman DX3 (on packaging title):
https://bootleggames.fandom.com/wiki/Zook_Hero_2

The box arts for both DX2 and DX3 are here:
https://themechanicalmaniacs.com/articles/pirateGB.php

Quote from Gauntlet101010:
"Rockman DX2 - Sent in by Jesse Brown. Named both in chinese and English. You know, just in case some poor sap was confused. Probably a copy of DX3 or something, with graphics from the X series on it, of course. It could also be a copy of Xtreme 2"

So that's why I'm curious about Rockman DX2. If it is really a hacked of Xtreme 2 then unfortunately, it can't be put on this site (hopefully someone put it out there somewhere).

Here is a link to a Taobao seller who sells most of Li Cheng's library in like-new condition. Scroll down to the part of the page to see what is at number 018. It is Rockman DX2, and the pictures show a Megaman Xtreme game and not a Zook Game. If you do not believe the seller's pictures then you can buy a copy off of them (it is not expensive) and find out for yourself. To my knowledge, Li Cheng sold three hacks of Zook Hero games. Rockman DX3 (Zook 2, Chinese version), Rockman DX6 (Zook 1, Japanese version), and Rockman DX8 (Zook 1, English version). Interestingly, the pictures show an alternative title screen to the one in the current dump of Rockman DX3. Anyways, CBA018 I am 99.9% certain is just a translation of one of the Rockman Xtreme games.

@ankos and ?
Thanks to both of you. It's all settled then.

No problem. I was the ? as well, I just forgot to put my name down so it displayed as a ? by default

@Ooh La La
It's just a Chinese translation of Megaman Xtreme 2, I downloaded and confirmed