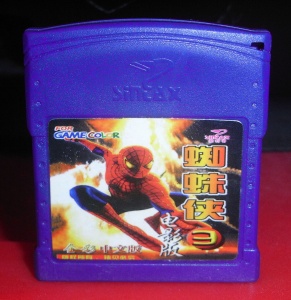 hey it's that guy! the one who's a spider! in a game by Sintax, called 蜘蛛侠3-电影版 (Zhi Zhu Xia 3 - Dian Ying Ban), or "Spiderman 3: Movie Version". the actual movie called Spiderman 3 would not be released for a good 3-4 years, so once again Sintax were way ahead of their time on this one.

It also has some of the most inappropriate music ever committed to game, so surely it's worth checking out on that basis if nothing else.

the same caveats re: fixage apply as with the Digimom Sapphhhiii dump, namely that the fixed version is 4mb instead of 2mb, and no I don't know how to get it working at its proper size. also thanks once again to Qiezei for the cart!

Does anyone know if there is a title screen hack of this game.

There is chuan shuo.