Why hello, I'm RobGBA! Just an introduction for myself, in case you're wondering who I am and why I'm here. I'm a member of the Pirated Game Central, and have interests in obscure games for the Game Boy. So with my small and progressing collection, I'll be posting my working dumps over here! 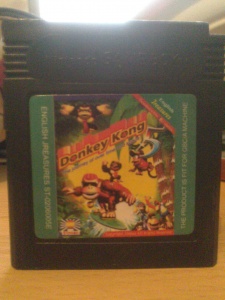 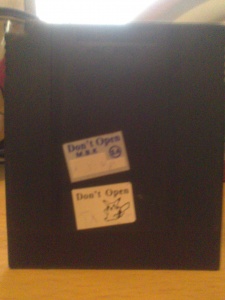 Hey look, it's an Engrish Jreasure from the lovely pirates at Sintax! Donkey Kong 5! You know, the one where Mr. Kong has a journey around time and space?

This one's on the same engine as Digimom, but this is actually an earlier release. Not really much difference, apart from sprites and such.

Thanks to taizou for fixing the ROM! Enjoy:

hi! my initial "fixed" version suffered from glitches in certain emus and didn't save properly due to a misconfigured header - i fixed it properly within 15 mins, but if you were quick off the mark and downloaded the rom before 00:47 GMT, then please redownload it and forget the old version ever existed. (if you're not sure which one you have, the broken version has the extension .gb and the fixed one is .gbc) thanks! & sorry!

what i love about that is that in the top right they wrote "English Treasures", spelt perfectly correctly, then for the text along the side they misinterpreted *their own text* as saying "Jreasures" because the font has a bit of a flick on the T that makes it looks like a J.

When I look at my sintax English Jreasures, it definatley isnt a T! :D

I have to let you

@Taizou
Hmm... I guess I could see your point. But I guess I could contribute mostly good fixed ROMs of mine of bootleg games and multicarts. Or possibly find extremely rare bootleg games to post up. I don't know. But yeah, it's not like I would be posting dumps, for probably until several years later. For several reasons, which I not going to say.

I want to play donkey kong 5 plz give rom.

Steve the link is literally here on this page

@taizou it didn't for gearboy

@Steve it is here