The Second Day of Sintaxmas 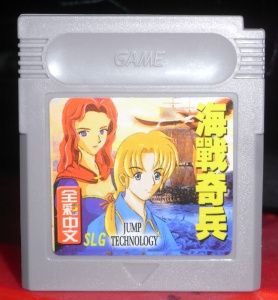 day 2 brings the first new game of this little selection - I've been referring to it as "navy game" but it tells me its real name is Hai Zhan Qi Bing (海戰奇兵). it's a strategy game, about, you know, boats and stuff. Cart provided by Qiezei!

coming up tomorrow... recycling for fun and profit.

oh and it says "Jump Technology" on the cart but that's just Sintax again.

There's some weird garbled bits of a DOS batch script at the beginning of the ROM, which appears to have been for renaming source files. It's clear that one part is supposed to be "REN SLG_SCR.19 SLG_SCR.20", for instance.

oh yeah! weird. there's also text from a Gamtec tool in there (as seen in a bunch of other Sintax and related games)

The music for level 2 is from the undumped Final Fantaxy IX. Also, the intro is somewhat unskippable.

Yeah, the music from both this and FFIX is actually from RPG Maker GB, because Sintax was never one for writing their own soundtracks. (To be fair, the RPG Maker GB soundtrack is *awesome*, so I can't blame them.)

This game is *basically* the same as Pocket Monster Saphires engine. :D Either way, this is bloody awesome, I love stratagy games like this. :)

I finally beat this game. 19 levels in total, after-battle boxes in stage 17 are glitched up.

nice one, havent played pirate game on gbc yet!

Strategy game? RPG Maker music? Has something to do with Sintax? SKOB's Fire Emblem!