The Fourth Day of Sintaxmas 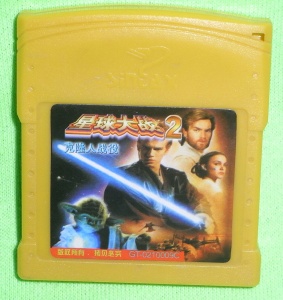 I've reached the conclusion that people on the internet talk about Star Wars too much. I hate to encourage such things, but, well. Sintax started it, so here we are! This one is called Xing Qiu Da Zhan 2 - Ke Long Ren Zhan Yi (星球大战2-克隆人战役) and... I don't know what's going on with that title screen.

They made a Star Wars game?! What's next from them, Doctor Who? XD

There is apparently an English version of this cartridge out there as well, according to the Wayback Machine version of Sintax's site: http://web.archive.org/web/20040110040350/http://www.st168.net/eng/mainroot/prodshow.asp?ProdId=st020

Also, the unfitting choice of music on the title screen deserves at least some sort of mention. (Seriously, what *is* it with Sintax and Pokemon Pinball?)

English version? Oh my days. *adds 'star wars gameboy' to his list of eBay pirate hunt searches, cause he's like that.*

Also whats the GT standing for? I know Jump Technology and Saturn Technology, but I just don't know this one.

No idea about GT - it's on my copy of Super Robot War X too.

A thing to note is that the later levels of the game use tiles from Mega Man 2 and 3. There are the crystal platforms from Gemini Man and some of the background elements from Metal Man's stage.

@Taizou
I notice a weird error in both ROMs. It seems like it starts the intro music right, then restarts it with a higher pitch. O_o

yeah, happens on real hardware too i think

Chowdit1 now that i remember i have seen the sound pitch frequently on another game too.

anyone have cheats for this game? I can't seem to pass level 2-1