The Sixth Day of Sintaxmas 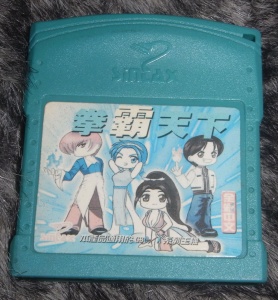 well this was kind of a last minute addition - I only just managed to get it working, like, two days ago, but it fit in pretty nicely with my plans to combine two of the upcoming games into one post. it's called Quan Ba Tian Xia (拳霸天下) and it's pretty much a King of Fighters game - I recorded a video of it a while back.

It's kind of weird - overall it's a pretty decent game, plenty of characters, even some unlockables (unlocked after you complete the game, and it saves them and everything) and a nicely done intro. But then on the other hand the only sound in the entire game is a single piece of ill-fitting stolen music, and the background glitches quite frequently during gameplay. It feels like it might have been unfinished, and Sintax just released it anyway. but still! worth playing.

coming up tomorrow... i'm just lion to you

Yay, another one to play through. :D

@Taizou
Do you know of the TV show from the 90s, "Wings"? An episode name parodied that. "The Lyin' King". LOL! :D I don't know if you would have heard much about with, just being UK, and that mostly it's a obscure, rarely heard of much, kind of show. But it's pretty hilarious. Family Guy's mentioned it.

Taizou do you know if there is a english translation or graphics hack of this game. I don't mind if they had to change the music.