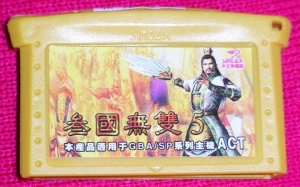 Well the world hasn't ended yet, so how about an extra game? I figured out how to get this one working right in the middle of Sintaxmas, but it kinda sucks so I was going to save it for later. But for the apocalypse, why not?

It's called San Guo Wu Shang 5 (叁國無雙5) on the cart and, amazingly, "Bynasty Warriors Advance 5" on the title screen, but it's based on the engine from Sintax's port(?) of Dragonball: Advance Adventure, right down to the status bar still saying "Gokou". I blogged about it here a while back. (oh and don't be fooled by the GBA size cart, it's GBC through and through)

also, leftover stuff fans: the header says Digimon, there are references to Sonic right at the start of the ROM, and Rockman graphics towards the end.

taizou: Heh, same with most of the later Sintax games.

moeny114 - whoops, thanks for the correction! i'll fix that.

Not just the ROM header that mentions Sonic-- there are some tiles at 0x448AD which also depict a certain hedgehog and his vulpine companion.

There's another set of tiles just before that one that appears to be from Sintax's entry in the Zook Hero franchise.

I *knew* I'd seen a Sky League thread a while back showing a GBC port of Dragonball Advanced Adventure, and I finally managed to find it again. Behold:

Even the layout of the intro sequence looks identical, except for the actual characters.