The Ninth Day of Sintaxmas

it's a Crash Bandicoot Christmas you guys 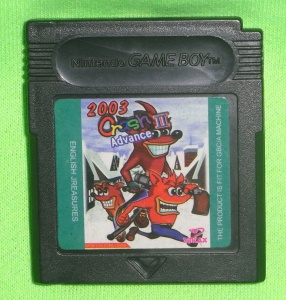 this game is called 2003 Crash II Advance, and I've never played any of the original Crash Bandicoot games, but judging from like one minute's research on youtube they've done a pretty good job of capturing the gameplay of the originals.

coming up tomorrow... the most legitimate thing sintax ever did

I hope he can dump Pokemon Platinum...

? is the default name if you don't enter one. And Pokemon Platinum has proven pretty tricky so far.. You can see literally the entire game on YouTube though, its so short.

Sorry about rob It's Me Arshes91 that i commented first i forgot to add my nickname adding in the post .

Does anyone know if there is a alternate hack of this game that changes the cutscenes or graphics. Also just to mention i need cheat codes so that i don't randomly teleport to the next level when the game feels like it please.