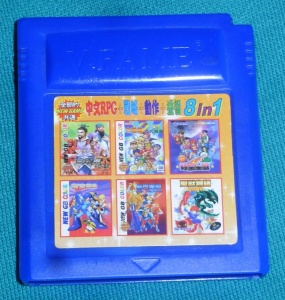 Sintaxmas may be over, but the most magical day of the year can come at any time - just when you're least expecting it.. it's New Vast Fame Game Day! (yay)

This is something I've been chasing for a while - it's a strategy RPG called Sheng Shou Wu Yu: Shen Long Chuan Shuo (聖獸物語-神龍傳說), which translates to something along the lines of "Holy Beast Story: Legend of the God Dragon". As you might expect from Vast Fame, it's pretty excellent.

Much like my previous dumps of Shi Kong Xing Shou and Xin Feng Shen Bang, this one was extracted from a Vast Fame multicart, this time an 8 in 1 - many thanks to Qiezei for providing the cart! You can find scans of the cart packaging, along with lots of other interesting stuff, on his blog.

Two ROMs this time, both work (ostensibly) but the raw dump has the wrong save type set in the header so fails to save properly in most emulators. The "Header Fix" version fixes that, and also the checksum too, just for the hell of it.

Oh baby, I'm glad this got dumped! I hope you had luck with the other games on the cart, too. :)

Going to bow this down. As well as Xin Feng Shen Bang.

yay im glad this one is dumped and shared. Is Long time ive searched that game was privately dumped by other user was called sky something.

Sky League you mean. His games aren't privately dumped. Infact, he decides to sell them! :@ (I hate him for that)

is just me or this game have a sound effects from shin magami tensei?

I still play this game right now on Vba it works perfectly and the header one can save 100% .

Well i heard on the net some years agos sky league was dumped like some of Vast of Fame games but was very hard to found em other dumps are in privates for some reasons. im glad is those was sellable i wish in the next good dump was rockman & crystal one of the most rare games was made by VF itself

This has finally been bowed down. 8 worlds, 44 stages and some something after the credits. Ending to be uploaded tomorrow, in GMT-6 timezone.

This game is pretty nice and easy to playtrought

OH MY GOD! I thought this gem would never ever be dumped. Thanks for sharing!

Can i have cheats for sheng shou wu yu?