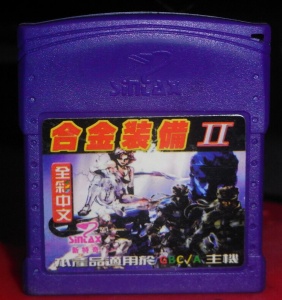 got some more backlogged Sintaxness today: He Jin Zhuang Bei II (合金裝備II) or Metal Gear II, a Metal Gear-based beat 'em up. It uses the Three Kingdoms engine but pretty much does its own thing with it (unlike Shaolin from the last post) and it's pretty decent, quite Metal Gearish in presentation and not at all Metal Gearish in gameplay.

(There might also be an English version and it possibly might have been released as "Eraq War II", but I've never seen it under either name.)

Cart provided by Qiezei - thanks (again)! As with the previous post, the raw dump should work in hhugboy + MESS and the fixed should work in everything else.

Just to note something in the game: only one level in each area's needed to progess; the rest are optional if you wanna get more experience and stuff.

Another game for my Sintax backlog... THIS IS F**KING GREAT!

Is there any translation out there? There are only a very few options to choose during the gameplay but i dont know how to advance. I have complete the ... city? and the ... heliport? in the first area but i dont know how to pass, i have talked to the guy in the middle of this are but he doesnt give me options.

Nevermind, after repeat one level two times an enemy drop a map and the guy in the middle let me pass to another levels.

How i can unlock the -i guess- cyborg ninja sprite?

The screen at around 00:14 in your video is actually the character select, you can press left or right on that screen to select a different character.

Interesting, never heard of this one before....

Just found a mention of this game, presumably the English version, in a Russian forum post from 2007 - http://www.sellvideogames.ru/viewtopic.php?f=9&t=162
says its actually spelled "Matel Gear" on the package. and sure enough googling "Matel Gear 2" returns a link to a (sadly inactive) MercadoLivre Brazil listing. so that's why I could never find it - I was expecting Sintax to spell something correctly. silly of me I know.

ooh, cool :D could you email me at cactusgunman@gmail.com please?