on a little bit of a roll today - next up I've got a couple of variations on a theme, the theme being Sintax's surprisingly-decent "Castlevania DX" game - a demo ROM has been circulating for a while but the full version remains elusive. But! Suddenly less-elusive are these two dubious hacks of the full version based on popular RPG series, which surely has to be worth something.

A few general points that apply to both of these: they were dumped from GBA-sized carts, but the games still run in GBC mode; the black spot in the pics below is on my camera; and the new replacement sprites use swords while the original Castlevania guy had a whip, but the collision detection hasn't been updated to account for it, meaning you have to duck to hit enemies which look like they should be reachable. quality etc 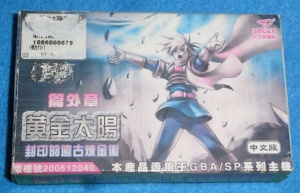 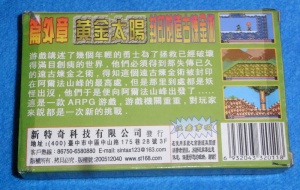 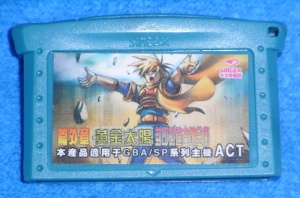 why yes, yes that is a long title, thanks for noticing. This one is based on Camelot's Golden Sun series, vaguely. 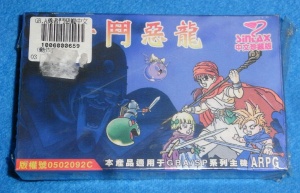 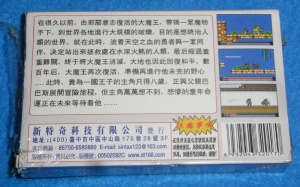 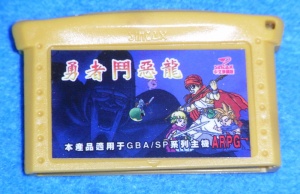 Well, VIII on the title screen, not-VIII on the box. But I think I've seen a box with VIII on it on Taobao or something. Anyway. Dragon Quest this time, and I do at least recognise a couple of Dragon Quest enemies they've shoved in there.

The Dragon Quest hack seems to have been the first of the two-- there are leftover tiles from its title screen in the ROM of the Golden Sun one.

Bowing down these new dumps soon.

The first name reminds me of SHENZHENSHIHENGGEKEJIDIANZIYOUXIANGONGSI­.

Just a reminder we have four versions dumped. Including the full version of castlevania dx. Now we are awaiting the raichu sprite and level graphics hack of Pian Wai Zhang Huang Jin Tai Yang - Feng Yin De Yuan Gu Lian Jin Shu or castlevania dx to be dumped too.

Is there a such thing?