okay let's pretend for a moment that these games have something to do with each other to justify posting them together:

They both have yellow carts. The label layout is basically the same. In fact both labels even show characters (who are not in the respective games) standing back to back. Both are later games in series Sintax has covered several times before, and to an extent each recycles something from one of the previous games. Both have Lemmings music. Both are basically platform/shooting games and seem to run on a similar engine, and both are reasonably fun despite some dubious production values. okay maybe these games have a lot in common! but only that stuff. everything else is different. 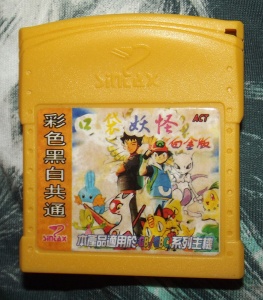 this is a fairly average platformer anyway. the sprites are cute! there are four selectable characters: Psyduck, Flareon, Pichu & Abra. and I have no idea if the MP gauge and the four icons in the bottom right actually do anything (the manual doesn't help) (also there's a story in said manual but its just the one from Pokemon Sapphire) 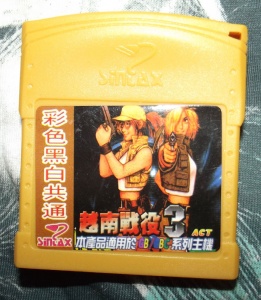 this one is a Metal Slug game. and strangely for a company so fond of reusing engines, it doesn't recycle the one from Metal Slug 2001 - or even the one they used in Metal Slug X - but the one they've come up with here isn't too bad. A few graphics are taken from 2001 though (the rest being largely ripped from either the NGPC Metal Slug games or various other sources)

whoa that was quick. they are short though.. i guess that's another thing they have in common.

But the Pokemon Platinum one was pretty straightforward to be honest.

Sky League is selling this btw, as Metal Slug 2 and the HUD is very similar.

Think this was mentioned, but Pokemon Platinum is the basis (or vice-versa) for The Incredibles game Sintax did. All they did was change the graphics and level order (the first level in this game is...I think the third on in The Incredibles.)

The cart designs look pretty neat. :o I have to say they're not bad at all for the later games.

you are the best bootleg game dumper.
Saludos desde Venezuela.

@Taizou
Can you dump Pokemon Leaf Green by Sintax, and The Incredibles by Sintax?

i would if i had them.

Just a note i need cheat codes for the metal slug clone because i can't pass a part in level 2 no matter how hard i try.

@Agumonfan ~ try to beat the game without them, be a man :P