Okay so this is a tiiiny bit out of the usual scope of this site here, since it's not technically a handheld game, but... there are certainly handheld versions of the console this game is for, even if it wasn't designed that way originally, so it almost counts. And this is has kind of become my de facto ROM-dumping blog anyway, it's just that until now I've only had Game Boy stuff to post. so here's a thing: 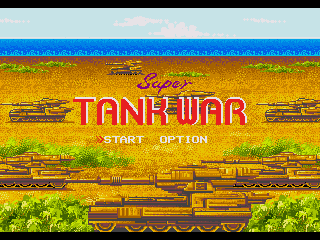 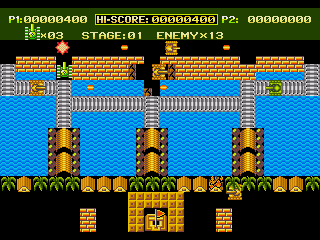 it's Super Tank War, a pretty rare Mega Drive (or Genesis if you're American) game by Gamtec. As with many unlicensed Mega Drive games, it's quite rare - literally the only copy I've ever seen documented anywhere is the one I own, and recorded this video from. It's also pretty much a Battle City clone, which is not an entirely surprising thing for them to have made, considering the popularity of Battle City and its hacks in Taiwan and other Famiclone-heavy markets, not to mention the fact that Gamtec had already made such a clone for the NES, variously known as either "King Tank" or "Super City Tank".

The actual ROM is 256KB, but at that size (in current emulators at least) the music and most of the sound effects don't play; something similar was recently found to be afflicting Link Dragon, and the solution simply appears to be doubling up the ROM to 512KB. Presumably this is some kind of unemulated quirk of the Gamtec mapper, and it's doing something like mirroring 00000-3FFFF at 40000-7FFFF and reading the music from the latter.. for some reason (my knowledge of Mega Drive stuff is pretty much zero, as may be apparent, so I'm not really sure why they would do this, or if that even makes sense in MD terms). But anyway I'm releasing both the 256KB ROM as the proper dump and a 512KB as a hack to get the music working, similar to what I do with raw and fixed dumps of Game Boy games.

Dumped by chôkai from my cart - also special thanks to Raistlin for arranging things.

The mirroring is due to how address lines are connected to the ROM chip.

The only difference between accessing 00000-3FFFF or 40000-7FFFF is that the upper address line is changed and the rest is unchanged.

Since the upper address line is not connected to the 256KB ROM chip, it makes no difference which area you access, same data is returned.

The same happens is true in any cartridges, just that games usually don't try to access the mirrored range. For some reasons, these unlicensed games do, maybe to ensure they are being run from the original cartridges and not from some flashcard (which would have different hardware layout) or emulators (which generally do not emulate the mirroring).

Both games (raw dumps) work with sound in Retroarch with Genesis Plus GX core though so it seems it's at least emulated in this one.

ah I see - thanks for the explanation!

which one? ive only been deleting spam afaik

nice one! battle city was one of my favourite nes classics of all the time.