YES! After a ton of work which I probably will write a blog post on at some point - Vast Fame GBA games are HERE!

To cut a long story short - these games are copy protected and can't be fully dumped using normal equipment/software, but I was able to dump them by observing the protection's initialisation routine in No$GBA, replicating it on a real GBA and dumping the ROM through the GBA itself using an Xboo cable (super thanks to Robyn for that suggestion!). But even with the games dumped, there's a bunch of other protection in place, which I implemented in endrift's excellent GBA emulator mGBA. So these dumps are now supported in mGBA nightly builds from 2016-06-26 onwards!

Unlike my previous GBC releases, I have NOT (yet?) prepared a version of these games with the copy protection hacked out. I may or may not do that later, but don't hold your breath too much. This means these dumps will not work on any emulator that does not implement Vast Fame's protection (i.e. any emulator other than mGBA, as of this writing) and they also will not work on flash carts. 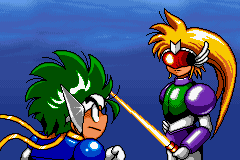 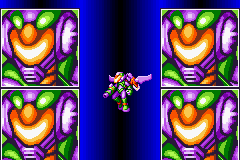 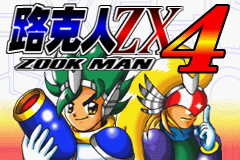 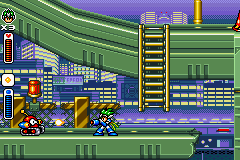 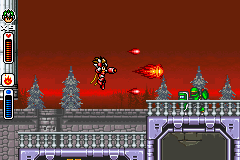 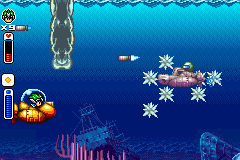 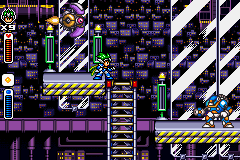 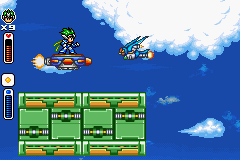 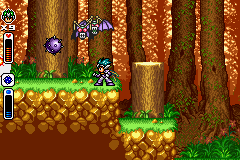 After that one, uhm, underwhelming semi-unofficial entry by Sintax, Zook is back for reals! You may know this game better as Rockman & Crystal; this is the Taiwanese release. For those unfamiliar with Zook, it's a series of Mega Man clones, and this one takes most of its inspiration from the X series. And I like it a lot! Okay it obviously was rushed (spoilers? there's no unique last boss, only a boss rush, and the Zero-ish dude from the first stage never shows up again) and jacks a lot of graphics from elsewhere, but they nailed the controls really well, and there's plenty of variety. And the music is p cool as usual for Vast Fame. 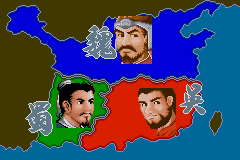 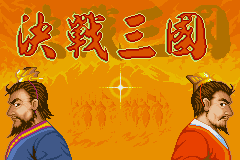 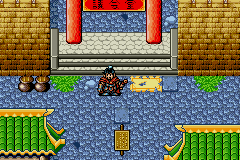 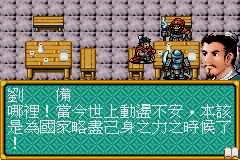 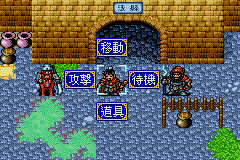 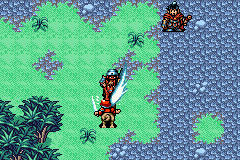 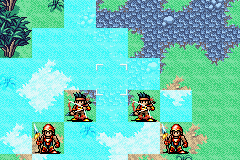 An interesting strategy RPG based on the Three Kingdoms period of Chinese history. Haven't played too much of this one, but its copy protection is implemented slightly differently from the others. 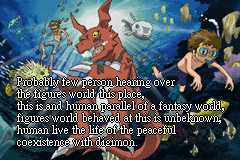 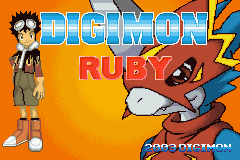 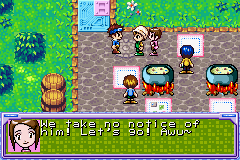 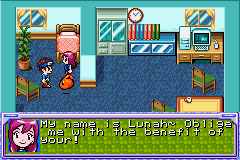 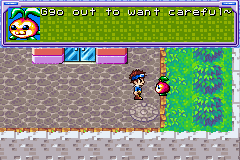 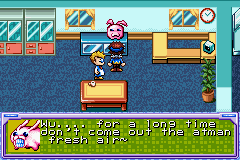 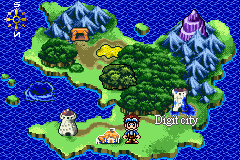 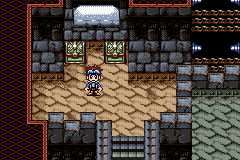 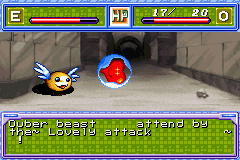 The famous(?) RPG with barely-comprehensible dialogue. A dump of this game is already available, but it comes from a later reprint with the copy protection hacked out. This is the original! It's the proper size (hacked dump is 32MB, the game is really 8MB) and may be less buggy (e.g. the hacked dump crashes and resets on the ending screen) but I haven't tested it thoroughly so can't confirm that.

There are several other Vast Fame GBA games which remain undumped, though - these are the known ones:

(For Digimon Sapphire - if you bought it brand new from a Chinese reseller from the late 2000s onwards, and it goes to a black screen after completing a level, it's probably not the original version I'm looking for. But if you're not sure, let me know and I'll help you figure it out.)

I really love the Zook Hero series, so seeing the final game released is great.

The only problem is that I can't play it on my PSP. If you can remove copy protection, that's great. If not, that's fine. I can still play it atleast.

Can we get some pics of the carts and boxes for these? Don't think I've seen an original copy of all of these before.

Thank´s for this great gift, i wanna play Rockman & Crystal in Visual Boy Advance, for some reason my pc no run the mGBA Emulator :(

You plan to fix Rockman & Crystal someday? well, if it is possible ._.

Poptheweasel100, COLOR - I *may* try to hack out these games' protection at some point, but it's much more involved than others I've dealt with, would take a lot of time and probably I'd miss something (like whoever hacked Digimon Ruby & Sapphire for the deprotected reprint carts). Hopefully developers of VBA and other emulators will begin to implement support for it though.. or maybe someone else could hack it out. I'd be happy to help anyone attempting to do either of those things, even if I don't do it myself.

Barver - hey, good to see you here, haven't seen you around in a while! And yeah, hopefully I'll get around to taking/posting pics soon. I have boxes + manuals for Zook and Sanguo but not Digimon.

Is it possible to rip the music from Zook Hero ZX4?

Probably, if you're just looking to make clean recordings rather than rip the actual music data/sound engine itself (not sure how you would do the latter on the GBA, there doesn't seem to be a standard format like NSF/GBS etc).

I have a bit of knowledge of VF's GBA sound engine thanks to my efforts hacking Digimon Adventure (by Sintax, but uses VF sound) so I could probably identify some ROM location you could modify to change, say, the title screen music, then you could record it from there..

@taizou: There actually *is* a standard music format for GBA music dumps, based on that used for PlayStation: http://gsf.caitsith2.net/

oh I didn't know that, thanks! I'm probably not going to rip it, but at least the opportunity is there for someone else to do it.

hiii I've been trying to find someone capable of dumping rockman & crystal since like 2008ish? it's amazing to see it finally out and available ! you're doing great work!!
A friend and I just played through the whole game off my cart and were informed by a lovely stream viewer of your work. Thanks again!
https://www.twitch.tv/protomagicalgirl/v/81626461

Hi! Would you be willing to lend me your Rockman & Crystal cart for dumping too? Zook Man ZX4 is the Taiwanese release and has dialogue in Chinese, it'd be nice to have both variants dumped.

We're using this rom in a small contest in tasvideos.org.
http://tasvideos.org/forum/viewtopic.php?t=18754

You made mgba support it so we can run the game fine but unfortunately mgba doesn't have a debugger.
It would be great if we could run it in other emulators to be able to dig more into the shit code and get more info, like displaying the disgusting hitboxes

yeah I saw that, I think it's really cool that you're using this game!

honestly my #1 priority with these things is preserving the game and getting a good dump out there with some kind of support, and I've done that - yeah it would be nice if it could run in every emulator, but I've at least provided the materials (as in the ROM and source code for the protection implementation in mGBA) for that to be achieved by someone else.

I'm not the greatest romhacker and Vast Fame's GBA protection is a bit more in-depth than something like Sintax's GBC stuff, so I'm not really confident that I would be able to do it at all, and even if I could do it I'm also not confident that my hacked version wouldn't end up introducing some bugs that weren't in the original (as is the case with the deprotected Chinese reprint of Digimon Sapphire)

I won't say that I'll *never* take a shot at this, but, as I said, don't hold your breath- it's not a big priority for me right now and kind of a crapshoot as to whether I could even pull it off at my current skill level. I'd be happy to assist and share info on the protection with anyone else who wanted to take it on though.

(although- which emulator/s are you using that have decent debug functionality? if they're open source, there's always the possibility of implementing the protection support into them, and *that* is something I could maybe do)

well, I think the only open source GBA emulator with a debugger is vba-sdl-h ( https://github.com/cosarara97/vba-sdl-h )

ah man that looks like it was forked from some old-ass version of VBA.. I'll look into it though.

I've had this same problem on the GBC tbh that the two emulators with the best debugging functionality, BGB and no$gmb are both closed-source. Honestly if BGB's source code had been available I would have implemented mapper support into that instead of forking GEST to make hhugboy.

The surprising part of the contest is that the final speedrun is going to be pretty entertaining to watch, and not only for the weirdos who like this game.

Here's our winning run. Thank you for your work dumping the game. I hope to never hear from it again.

I wonder if a fan made English translation patch for Juezhan Sanguo (決戰三國) is possible. It is quite interesting, and would be even more so if the dialogue was comprehensible for non-Chinese speakers.

I found Queen Fighter 2000 for GBC on a Taiwanese Shopping Site, how can i buy this?
Because i dont know someone who can buy this for me?

There is a service called Letsgobuy, which I use to buy stuff off of Taiwanese sites. They are trustworthy, and take paypal, but their prices are kinda high.

Here, have a link

That'd be good. I'd like to see that dumped.