So it's my favourite time of the year! The time I find some games in English!
All of these games have been dumped in Chinese before (or as a title variant, in one case), but now I can read them!
Special thanx to Svetlana for her help in obtaining the first three games! She is cool & also makes cool music

General note - the reason I've listed two titles for each of these games is that, in typical Sintax style, the name on the label (and presumably the box, where one existed) never matches the one on the title screen. So I've given the label title first, with the title screen title second. Except for the third one where I don't actually know what the original label title was (more on that later).

First up! THIS GAME IS ABOUT ME Okay so I guess this game is about some other lion asshole or something. It's pretty heavily based on the old official Lion King game, mostly consisting of fairly large open platforming levels, although unlike that game you have to collect a series of gemstones scattered around the levels instead of proceeding to a boss fight at a fixed point. It does mix it up a bit with a short chase stage which seems Simba pursued by an enormous buffalo though. And there's no adult Simba sprite in this game at all (.. kinda like the official NES game then). Also it kinda sucks tbh

This is one of Sintax's more interesting games, having a definite Zelda 2 vibe about it with its mix of a top-down RPG-style overworld and side-scrolling action. I can't say I find the action stages particularly enjoyable, but hey at least they tried something a bit different. This game also benefits more than the others from being in English, since there are various NPCs to interact with and other bits of useful text scattered around. Except for the item/magic names which they forgot to translate. oh well.

Incidentally the label on the cart here is basically just a copy of the Fellowship of the Ring movie poster, with none of Sintax's entertainingly weird design, so I would guess it was published by someone else. But probably not 'New Game Color Advance', who published Pokemon Sapphire and some other stuff, because the style doesn't match up with their known releases. Mysterious!

This is. This is a thing right here. It came in a cart labelled as 'Mickey's Speedway USA', in a lot of games I'd only bought to get at Lion King 3. But that unassuming cart revealed something far more magical. Super Marrio Sunshine! Despite the promises made by its name, it is identical to the previously dumped Super Mario Bros clone Donkey Kong 5, but with two important differences:

That's right! If you hit the flagpole (or, uh, bell-rope, as it is here) ANYWHERE other than the very bottom, you get an instant game over. You're forced instead to simply shuffle through the bottom and accept the measly 100 points to continue the game. And yes that's not an emulation bug, I have confirmed this behaviour on the real cart. Thanks Sintax!

(Oh and if you were wondering - the Mickey's Speedway label appears to have been the result of some label-swapping shenanigans by a previous owner of the cart, which sadly resulted in the Marrio Sunshine label being lost to the mists of time)

The second edition Harry Boy: The secretx of the chamber of secrets / Harry Boy and the Chamber of Secrets 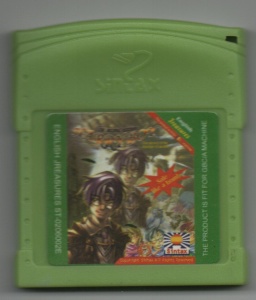 This one was dumped by Robert Bannister who also provided a picture of the cart which you can see at the right. It's another variant of the Super Mario Bros clone engine as seen in Donkey Kong 5/Super Marrio Sunshine, except you play as Harry Potter - starting out as a frog (in a manner probably-coincidentally reminiscent of the NES SMB hack 'Frog Prince'), with pieces of meat returning you to Harry form, because uh sure why not.

Incidentally, according to Sintax's numbering this one is "ST-0206002E", which would make it the second game they released (after Super Robot War X) and their first on this engine.

oh yeah if anyone was wondering, once again i have not yet updated the dumping project page with these because I Am Tired

They just won't stop using those Tiny Toons boxes will they?

oh cool! and yeah that definitely looks like a NGCA label to me.

I remember saying back in 2013 that the Chinese version of their LotR game had weird graphical glitches (even triggered a Game Over IIRC) in the final stage after walking through an enemy. Seems it doesn't happen on this one.

Wait. When I completed the other dump, it was VBA's fault. Gambatte doesn't have this issue.

Wow, Simba, another game about you!!! They look great, Sintax bootlegs are great.

I wonder why Super Marrio Sunshine is glitchy? Maybe it's the copy, since the label was wrong, i dunno