Got something a little bit unusual this time: 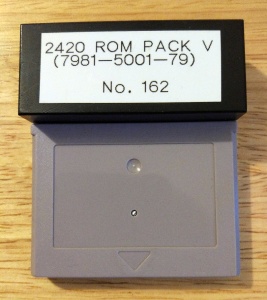 Looks like a prototype cart, and hardware-wise it pretty much is, but its purpose is something else entirely!

There isn't much info on these things at all, but from what I can ascertain it's from a series of carts distributed to camera repair shops for camera diagnostics/adjustments/repair. Presumably at some point the camera manufacturer wanted to create a portable diagnostic tool and decided to base it around cheap commodity hardware - the Game Boy - rather than spending time and money on developing their own machine or using something more expensive and unnecessarily sophisticated for the job.

I only have this one cart, but Steven Seventyeight on Youtube has a bunch more, plus a modified 4-player adapter which was presumably used for connection to the cameras. I have neither the corresponding camera nor the adapter, so mine is not much more than a curiosity at this point.

The original assumption is that these were likely for Ricoh cameras given Nintendo's history of working with them (e.g. for the chips used in the NES), but codeman38 identified some of the cart numbers as actually corresponding to internal model numbers for Minolta cameras. This document lists a bunch of them; the cameras seem to date from the mid-90s so presumably these carts would have been made around the same time.

As mentioned, the case and PCB seem to be the same ones used for Game Boy prototypes; the PCB is Nintendo-made, labelled DMGC-MBC1-512K-EPROM1-01 and it has a 512kbit (64kbyte) EPROM installed stickered "2420V" (although the ROM is only 32kb and doesn't actually require the MBC at all). However it has a black plastic cover over the EPROM which I haven't seen on any existing prototypes, so it may have been custom-made for these carts to prevent damage to the chips.

Without a camera connected you can't do much - most actions will lead you to this "I/O Error" screen.

There isn't much in the ROM pointing to who programmed it, although there is an unused(?) 8x8 font that also appears in some early Taito games. However it feels more like it was programmed in-house by Minolta rather than outsourced to an experienced Game Boy developer; the UI is very 90s-camera-menu-like and its unusual use of the Game Boy's controls (Select to select menu options; A, B and Start are unused), plus it redrawing the whole screen on every button press, gives the impression of a programmer not used to working with the system. So the font may have been a leftover from them studying existing Game Boy software to figure out how it works.

So I found some more info, via repair manuals and parts lists..

The system was referred to by Minolta as the "HIT System" and the Game Boy as a "HIT Controller". There are at least 100 different carts plus the adapter (known as the I/F box) and different connectors for each camera. Probably other related equipment too.

I acquired one of these on eBay and it works and was dumped. It says "2072" in the ROM, which would translate to a European Minolta Dynax 7000. A camera that according to eBay does not exist or at least was never traded. I bought it for the Gameboy Dev cart, not the ROM so I did the research by myself to find out what this cart actually is. It has the black hard-plastic cover. Which keeps falling off. Really great cover. I think is was glued on at some point. It has no labels or markings like the ones pictured above.

The seller also had a 4 Player Adapter adapter which I did not get because it looked normal without any wires sticking out of it and I did not know at the time that it might be special. Neither did the seller, who also carried some Minolta lenses, so I guess it came from a reseller liquidation. It was sold as without mentioning the HIT System and only mentioned the use for gaming, so the seller could not place it either, I guess. He also sold me a bunch of EPROMs which, as it turns out are not compatible with the Gameboy Dev Cart.

Looking at a PDF called "2181 Service Manual Troubleshooting Guide" (I believe you know this one, if not google it, it's out there), there is the diagram of a camera connected to the HIT Controller via the I/F Box. The HIT Controller looks like a perfectly ordinary classic DMG. Likewise the I/F Box also looks like an ordinary DMG-7 4 Player Adapter. The magic must lie in the cable between the camera and DMG-7, which I could not find among the other items of the seller.

This story comes to you from Germany where the EPROM was sold and bought. I also found a thread in a German photography forum from 2007 where the usage of the HIT System was discussed mostly revolving around the "they are using prehistoric Gameboys to fix our high-end cameras!!! COOL!!!" but the admins canned it because they did not want to offend Minolta because of a link to the above PDF in the first post.

Hello,
My father has been a camera repair tech for over 40 years. In the mid 00s he bought out a closing camera store. While going thought the boxes of things I found a DMG-01 gameboy and thought "that was odd". About 4 years ago I was going back thought some of the boxes looking for camera parts and came across this same cart. Thinking it was interesting I just set it aside. Well more digging in boxes 2 years ago has reviled that I have the entire set of these carts (20 carts), the jigs to hook them up to cameras, and all required adapters (modified 4 player official multi taps). I'm trying to get a list of what cameras are associated with which cart (because odds are I have them) so I can put together a little history video of the system and show demonstrations of the system working for it's intended use.

cli & bill - thanks for sharing that info! Bill I'd be interested to see that video when it's done!

Is that vid done?