About a week ago I released released hhugboy v1.2 with support for some new mappers and stuff which literally no dumped games used. SO that probably meant I had some new dumps in the pipeline? Yeah? Maybe? OF COURSE-

So first up: here's a multicart! 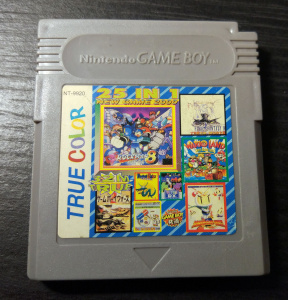 I picked this cartridge up recently, mostly because it bore several hallmarks of notorious bootleg cart makers 'Ka Sheng' (卡聖), also known as 'NT'. The 'NT-xxxx' ID, the 'New Game 2000' text, '(capacity) TRUE' in terrible WordArt; all of these are common features of NT carts on either the Famicom or Mega Drive. Not only that, the artwork used for Wario Land - with Bunny Mario edited in - is the same one employed for their release of "Wario Land 7" for Famicom.

Now, although this is one of only a few Game Boy carts with explicitly NT-style IDs and text on it, MANY more were released in its wake featuring similar idiosyncratic design sensibilities to those employed on NT's Famicom labels, not to mention similar PCB codes, menus, and mappers. This line of carts also happens to encompass almost all games by the infamous developer Makon, from Rockman 8 onwards.

So does this mean NT was Makon's publisher? Probably! Which would make sense, since it's known Makon contained at least one ex-Sachen staff member, while NT itself had published games by ex-Sachen devs for the Famicom.

Here's the menu - as the label suggested, this multicart contains Makon's monochrome GB 'classic', Rockman 8, plus a bunch of regular GB/C stuff.

So let's start up Rockman 8, in all its colourless gl..

This is extremely my aesthetic

And also at least, like, 5 more colourful than regular Rockman 8

So what's going on - did Makon colourise this game? NOPE the multicart did! Unlike most Game Boy Color multicarts, which reset the system when booting a mono Game Boy game, this does not. Instead it loads its own set of default palettes into memory, then boots the game directly in GBC mode, giving each game a preset background and sprite palette.

Other games mostly have an ugly red/green palette like Final Fantasy 4 here (a Chinese translation of SaGa 3), although Dr. Mario has a pretty neat blue/yellow one. Pocket Bomberman is the sole actually colour game here.

Both Wario Land and Final Fantasy 4 can save data, but the cart has no kind of save banking support, so if you play one of those games it'll wipe out your save in the other. A similar issue can be seen in modern Famicom/NES multis.

I also extracted Rockman 8 itself, which sadly runs in boring ol' monochrome. This game has been dumped already, but the existing dump is marked as 'bad' and I'm not entirely sure where it came from.

The raw version again will only run in hhugboy v1.2, but I was also able to hack it to run under regular MBC1, which will work in any emulator or flashcart or whatever you care to mention. 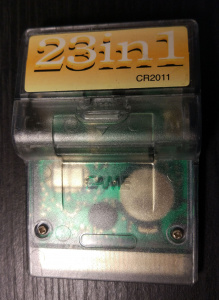 This one RUMBLES! Just like Pokemon Pinball and like 8 other games no one remembers! For a while Makon and NT leaned super heavily into this gimmick, with a string of multi- and single carts coming an in oversized, rumble-motor-packing design copied directly from Nintendo's own rumble carts, right down to its requirement for an additional AAA battery.

The rumble motor in my cart is broken, but if it's anything like other Makon games it only uses the feature at the start of each stage and when you get hit by an enemy.

This is possibly the first time this game has been completely emulated? Again there's another dump marked as 'bad' which possibly contains all the data but is smaller than the real thing; the complete dump is 512kb but it actually has less than 256kb of unique data.

As for the other games, we have another bunch of mono stuff, colourised with a slightly different palette to the last cart:

And here's the ROM! This uses a slight variation on the mapper used by the previous cart; this one is based on MBC3 while the 25 in 1 was based on MBC1.

And here's Super Mario Special 3 extracted. Unfortunately I couldn't hack this one to a common mapper so easily, so it'll only work in hhugboy v1.2 for now. 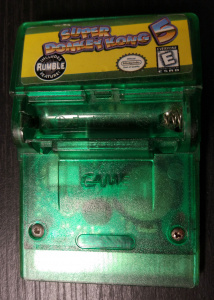 All of Makon's mono games (that I know of) would receive this treatment, and all of the colourisations were pretty shoddily done. They almost resemble the palettes found on the two previous multicarts, but at least there's some variation.

My cart does at least have a still-functioning rumble motor, and it's utilised a bit more creatively than the usual Makon fare, adding in a rumble when you bounce off an enemy.

With this one I was once again able to mapper hack it, so you can enjoy(?) Super Donkey Kong 5 on any emulator your heart desires.

UPDATE 2017-08-31 - I'm marking these dumps as 'alt' for now because I have a different dump from a couple different sources (which I'll be releasing later)- this was verified multiple times from the same cart so does not appear to be a bad dump, but if nothing else it's not the commonest version

What other makon games do you have? I have been hoping to see their pokemon games dumped.

I have a bunch of them, but the later stuff including their Pokemon and Digimon games uses a different mapper to the ones these games run on so would need some more work before I could actually do anything useful with them

Oh yeah incidentally the "32M TRUE" on the first cart is not even remotely true, the ROM is actually 2 megabytes = 16 megabits

They pulled precisely this same shit on their Mega Drive releases

("They" being Ka Sheng, that is. Makon didn't do any MD games that I know of)

So is the rumble emulated?

not yet, but it will be in the next version verrryy soon since i got the opportunity to play around with a multicart with functioning rumble

Wow Could I Buy Some Of Your Carts Please?

sorry, I'm not selling any at the moment!

I played Super Mario Special 3 for a bit out of curiosity, and wow, it really makes you appreciate the physics in the official games. You can't even duck as Raccoon Mario!

That's not news to me, considering YongYong standarts.