When I dumped & emulated the last set of Makon/NT stuff, there were 2 remaining games that I knew to be both on this mapper and undumped, and at the time I didn't have access to either of them. But thanks to the generosity of 2 people plus a fortuitous eBay find, I ended up getting hold of them 3 different ways. which was very cool!

(Note that you'll probably need hhugboy v1.2.1 to play the raw dumps of any of these carts, but they will work in v1.2 if you manually set 'unlicensed compatibility mode' to 'NT KL type 2')

So first off, I'll start with the single carts. These came complete with box and manual from an eBay seller called beauauto, who amazingly got hold of a big ass box of brand new carts from a warehouse - currently they're selling them off for $30 each if you want to get a piece of this action.

They're all functional rumble carts, and accordingly all of these games support rumble, albeit in the half-hearted sort of way you usually see from Makon games. 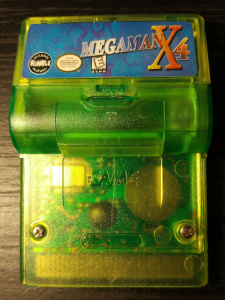 So, first game! Megaman X4! What could this be?

If your answer was "Rockman 8, badly colourised, with a different intro and the levels rearranged" .. you've probably played a Makon "update" before.

This version of course does not fix the bug from Rockman 8 where essential moving platforms disappear partway through the level if you kill too many enemies.

But hey, good news, at least I was able to hack this to MBC5 so you can play it on anything. 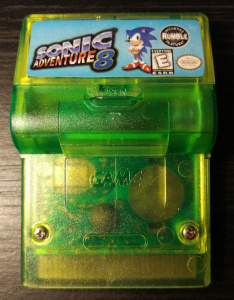 Coming hot on the heels of Sonic 3D Blast 5 and Sonic Adventure 7, it is of course..

Another rearrangement with bad colours! Literally not much more to say than that!

(Update: you might need to turn off "halt on invalid opcode" in hhugboy since there seems to be a certain enemy in one of the stages that can trigger one) 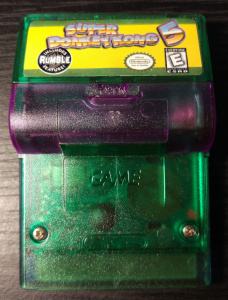 I already dumped this one previously, but since it came in a set with the other two games, I took the opportunity to redump it, on the off-chance it was a different variant or something. And it turned out it was different by a few bytes; not sure what the differences are, if anything significant at all.

But having also extracted the game from one of the below multicarts and found it to match this version, I've reclassified the other as an 'alternate' dump; I did redump the other cart multiple times to confirm I was getting a good read, and the dumps were always consistent, but it's possible there's something wrong with the cart and that the other dump is therefore bad. So for now I'd say you can consider this new dump to be the 'canonical' dump of this fine game.

As standard for Makon/NT releases, several multicarts were issued containing these games. These first two were lent to me by max6464646464 - thanks! 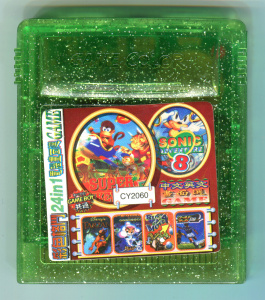 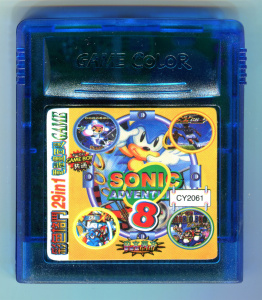 They're titled 彩色格鬥24in1電腦畫面選GAME and 彩色格鬥29in1電腦畫面選GAME in Chinese, which translates roughly to "Colour Fighting X in 1 Computer Screen Selection Game". Seems a little bit weird since these carts have no fighting games, but hey.

The 24 in 1 has Donkey Kong 5 and Sonic 8, the 29 in 1 has Rockman X4 and Sonic 8. Both carts then also have a set of minimally-colourised regular GB games, in the style of the previously-dumped multis.

Also, both say "NEW GB RUMBLE" on the menu, and have "Rumble" in Chinese by the Makon games' names... almost as if these are non-rumble versions of carts designed with rumble functionality WELL 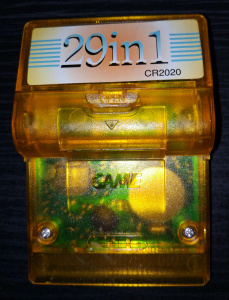 Thanks to Pepper9801 for lending this one! This is exactly the same as the 29 in 1 above, but with rumble in place.

Here are the multicart ROMs, all work in hhugboy only:

I should also point out that I attempted to dump the games myself, an unsurprisingly got no usable ROMs.

If you can dump them at 512kb you should in theory get dumps matching the raw ones I have up here, I didn't do anything fancy apart from that

They were only 256 kb, and did not even work with HHUGboy. I used a bennvenn device to dump them.

^ forgot to include name sorry

Yeah you'd need to override the autodetected size to actually dump the whole thing - they use the pretty common unlicensed trick of faking the size in the header, so dumpers using that value give you an incomplete dump. Not sure from memory how to do that with the bennvenn software but I think it's possible.

btw i wonder if u even check blog posts :P
but u remember the barver battle saga port? the one made by tian yuan cao team and they reused the engine in a game based of a novel, shining force and sintax used their engine to make 1 rpg

i have a few secretx(harry boy?)

2:the port has unused graphics from the original chinese final fantasy title screen! i wonder if theres a way to re enable them

3:the current dump seems like a demo, cuz theres a butterfly catching part where u must make a potion made out of 3butterflies and your in a forest maze loop is there a way to acess maps with cheating like changing current map or player x/y on map? cuz id like to see the ending as well as the sintax resprite.

btw was beggar prince gbc dumped? those tian yuan cao games are somethin of (bad)quality
btw theres a bug in shining force:
the damage the text boxes say u get/do in battle must be added by a value of one.
example
got 2 damage
2+1=3
result:three
so i get three damage

Beggar Prince isn't dumped nah, the Sintax releases of those RPGs have some unique protection that I wasn't able to get around..
I have a Sintax release of the 'Barver Battle Saga' game though and it has completely different graphics .. not sure about the Li Cheng release if it's broken or incomplete or what, they often caused bugs when hacking out the original game's protection

I´ve been looking for that 29 in 1 for awhile now. Does anyone know where to find it specifically, any links possibly?

generally it's hard to find specific multicarts since so many different ones were made. all i can recommend is watch on ebay for "29 in 1 gameboy" or something

@Taizou I have a multicart that looks pretty similar to the ones you showed here (the non-rumble ones). When I put it in my gameboy, it shows a Nintendo logo but then gives me a white screen. When I put it in my BennVenn machine, I got a perfectly functioning ROM for the Chinese version of Makon's Mewtwo Strikes Back (with Makon soft copy protection, not Li Cheng copy protection). I was curious if you had any trouble getting your multicarts to work on actual hardware. According to the game's sticker, it also has that Capcom vs SNK game by Makon

I have seen similar things happen with Sintax games (where it won't boot but dumps perfectly) & I think it's most likely a fault with the PCB or mapper chip which is preventing it from operating in multicart/protected mode, so it only works like a normal MBC5 clone. Which means the data (at least for one game in the multicart case) can be read out just fine and will run in an emulator that emulates the mapper, but the game won't actually play.

@taizou Thanks for the info. At first I was thinking that it was like how some famicom games only work on clone systems, but that makes more sense.

Which makes me wonder why it won't? (also ignore my 3-years ago comment, my english sucked back then)

The Games Classic
Not good Gráficow And Music
So Happy? xd

Sonic 8 And Mega Man X4 It's Bootleg
The Games, So Classic