Back at it again with a weird GBA cart: 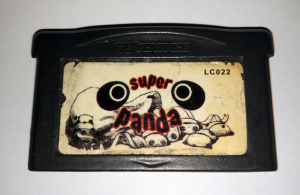 Super Panda! What could this be? I had my suspicions, but... 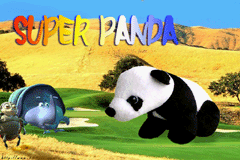 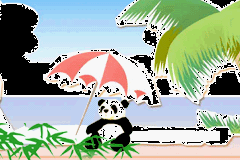 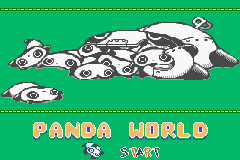 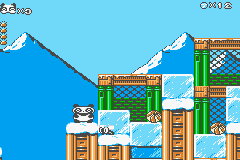 Yep, it's a NES game running on GBA using the free PocketNES emulator, a common tactic of bootleggers looking to stretch out their lineups. As with many of these carts, it has a newly-added "intro" consisting of two static images that zoom into the screen, then launches straight into the emulator. Note also that for the second of the images they managed to fuck up transparency and make the white areas black - here is what it probably should have looked like.

The game being emulated here is "Panda World", a platformer running on the same engine as the better-known Pocket Monster and equally-poorly-known Super PoPo's Adventure, likely developed by entities related to Gamtec or Super Game. This game has been dumped for a while, so I figured the GBA cart was nothing too special - just a ROM from the internet with a couple of images slapped on the front - and didn't pay too much attention to it.

But then I realised something: the Panda World ROM was only released by Cah4e3 in 2010. That's pretty late for a new mass-produced GBA cart. Not to mention the general condition of the cartridge made it appear much older. So I opened it, and inside found a sticker on the PCB indicating a 2004-2005 date! So this was made well before the ROM became widely available. Not only that, on the back of the PCB was the code "4351-XB"; Panda World was dumped from a multicart with the ID XB-F812. "XB" there is though to stand for "X Boy", a brand name of Unite Lucky Technology. So I believe this is probably a GBA cart produced by the original publishers of Panda World, using their own ROM.

That's already interesting enough for a nerd like me, but you may be wondering if there's really anything different from the existing dump. Well! The version on the multicart apparently had some weak copy protection, which was disabled by Cah4e3 in order to make it run on the common MMC3 mapper. But since PocketNES doesn't support this protection, the ROM they used here is already MMC3, either the original version before the protection was added, or an "official" hack removing it.

But of course it's a NES game, so we can extract the NES ROM too, we don't have to be restricted to playing it in an emulator-inside-an-emulator: 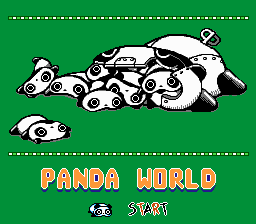 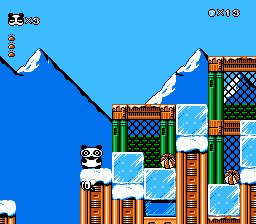 Once extracted, it seems to work exactly the same as the existing dump. There are differences in the ROM, so there may be in-game differences somewhere, but I haven't verified this either way. (although one large difference is apparently accounted for by the presence of a block of Tengen Tetris graphics in this version, for some reason, almost certainly left in by accident and unused).

So that's it for this .. variation of a panda game. But one final point of intrigue is that the ID of this cartridge is "LC022", probably implying the existence of others in the series - I've never seen any, but is it possible X Boy (or whoever) released other unique games in this line? Maybe Super Popo's Adventure, or other unknown titles? MAYBE. Leave a comment if you know anything!

.... so vastly the bootleg game´s world

I don't know where I found this, but I have a pictures saved of a cart with the ID code "LC019" that just like your cart says
"GB' ADVANCE" at the top of the shell instead of gameboy advance. It appears to be a Spiderman game