got another dump for you all today - a game by the name of Digimon 9, or, you know, other things. Its full Chinese name as per the title screen is Shu Ma Bao Long 9: Bao Long Pian 2002 (数码暴龙9-暴龙篇2002) but I'm 99% sure this is a title hack anyway, judging from the crude title logo.

It was developed by Sintax or BBD or whoever was behind their earlier games; being an earlier one, it actually seems to have had a decent amount of care and effort put into it - the cutscenes are really well-done, the sprites are cute, there are some nice little touches like the falling leaves in the first level and idle animations, and it all plays quite well as far as generic GBC platformers go. The music is still from Lemmings though. As usual. 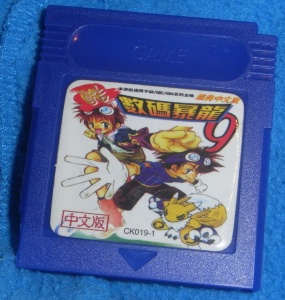 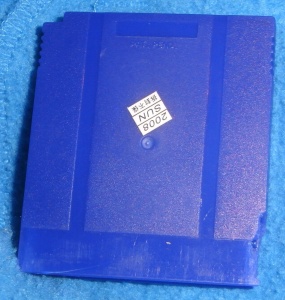 Anyway this cart is another nicely protection-free generic release courtesy of the same company that brought you the Pokemon cart earlier - I suppose a hacked title logo is a small price to pay for a working dump. The raw version works but it's 4mb - the fixed version is only 1mb it just works, okay. And that's that. enjoy!

I know Taizou's already commented on this video, but just to let the historical record be complete...

R.I.P., only other extant copy of this game. (And it was the original non-title-hacked version, too! In English, even! -_-;;)

That sucks. I'll add it to the undumped alternates.

@Taizou
Could you show the cartridge board? I want to also see it, since the condition of the cover is broken. My point of this, is to check to see if it is broken inside. Either ways, did you swap cartridge covers when dumping this, or not? Because that might have affected the programming of the ROM dump. If you didn't, please could you re-dump this to have a better cartridge cover. I still want to first see the inside, clearly.

its a 1:1 match with the version on the digimon 10 in 1 so theres not much chance of it being a bad dump.. the broken case doesnt make any difference

@Taizou
(Bump? Sorry, for how it's been more than a exact year. :_ Whoops.) Really? I honestly thought it would have, maybe just VERY SLIGHTLY.

@Codeman38
Fuck! D: I REALLY wish I got to see what it was like. How and why did I not check to see what that was like for 2 years. I guess, either, I was too tired to, or I was busy. Did you download the video? If you didn't, why? Was it that you didn't expect this happen? By the way, I'll do something to celebrate your 10 year anniversary on YouTube. *wink* Just maybe expect it to be QUITE late. I was even going to the same for a 20th year anniversary of Sachen's "Rocman X". Which the date of it seems to be on GameFAQs. Apparently, the 31st of December, this year.