So I mentioned in the Pokemon Sapphire post that that cart used the same protection as GBA Sintax games. You probably see where this is going.

These things have eluded dumping for YEARS - well, get ready to get extremely bored of them because there are like 20 and most of them are exactly the same!

Digimon Adventure itself is a port of a SNES game, supposedly made by Sintax with help from Vast Fame (borne out by its use of Vast Fame's music) - but Sintax themselves clearly had no idea what they were doing on the GBA once Vast Fame was out of the picture, hence them putting out the same broken game over and over again with different graphics. 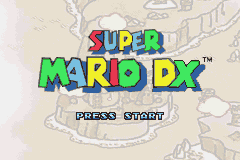 This particular iteration is "Super Mario DX", aka just "Mario DX" on the cartridge, and its cartridge ID number is "E12-U8". 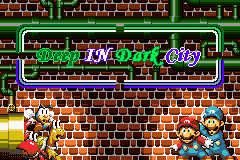 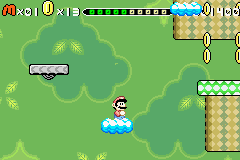 Most of its graphics are from Super Mario Advance 2, at least to begin with, so you could almost mistake it for Super Mario World in stills. Until you see the second level and its subsequent boss fight, anyway. 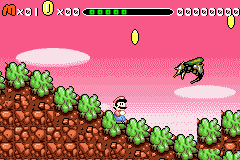 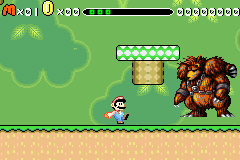 In common with other early games in this series, it has a tendency for the in-game music to randomly cut out and then later be replaced by a different track when certain enemies appear on-screen - this due to a bug with how sound effects are handled, which was at least fixed in later entries. You can also experience such niceties as platforms with no collision detection, bosses whose behaviour can be charitably described as "arbitrary", and many many more?!?

This was ALMOST dumpable using the same technique as Pokemon Sapphire, EXCEPT that one of the "trap" addresses which locks the cartridge from further reads was placed in the Nintendo logo in the header, meaning that any attempt to reboot the cartridge would lead to it being locked out. How in the hell do you solve a problem like that when your entire dumping method is predicated on rebooting the cartridge? Well... you need to somehow disconnect the data lines from the cart to the GBA while retaining power. And it just so happens that there are ridiculous, bulky "game switcher" devices which do just that!? So the process becomes a bit more awkward and convoluted, but I got there in the end.

As with Pokemon Sapphire, this ROM was dumped with addresses skipped and patched back up from repeated data; and, again, the ROM is 32MB, when the actual game data is only 4MB, since the data is mirrored in weird ways that the game relies upon. I've also patched up the overwritten bit of the Nintendo logo in the header; the bytes that overwrite it here are "90 AE 4B 4A 59 4A", with only the middle two bytes being different from Sapphire. It's gotta mean something? Maybe?

Anyway: here is the ROM

Thanks to SuperRetroGamer2741 for lending this cart! He's also done a full playthrough of the game: 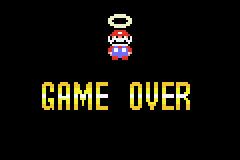 Only with Sintax would you hear stories of a mysterious beta build of a game being released, only for it to be recycled a whole bunch of times in full version. Didn't something like that happen with their Castlevania game as well?

Anyways, this is a really cool dump. Thank you for sharing it

Hoperfully this means that Sonic 3: Fighter Sonic can be finally dumped!

this is the physical embodiment of my mario shitposts

This game is finally be dumped!
I hope the next one is Sonic 3 Fighter Sonic!

@anewkindofscience The Castlevania game was kinda the opposite, the demo was a cut-down version of an update/hack of an already released game - the original came out around 2003 and the update and demo were made around 2005 I think

@taizou Thank you for the clarification. A lot of stories and info about these old bootlegs are hard to source, so it can be difficult to get the complete picture at times