Hello!! Today, after a long string of GBA dumps, I'm back on the GBC train with... this average-looking multicart? 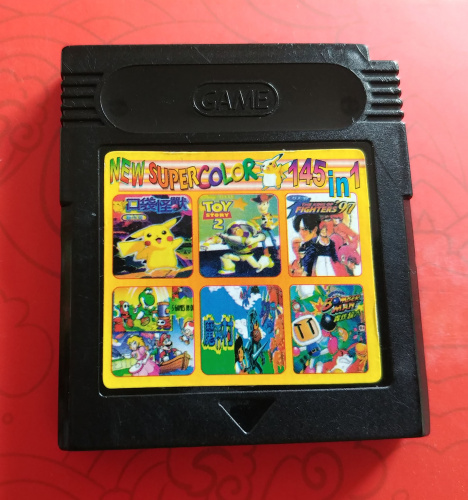 Well, in fact, it's not an average multicart at all; for starters, this really does have 145 games with no repeats, an impressive feat in the Game Boy era where very few carts legitimately reached triple digits. Its ROM is 16 megabytes, the same as the Vast Fame 18 in 1 - but while that cart was stuffed with later GBC games with larger ROM sizes, this one instead mostly opts to cram as many smaller mono games into the space as possible. That said, there are five one-megabyte games in here, so if they really wanted to they could've upped that game count even further, albeit at the cost of losing some of the more appealing titles. It also lacks any kind of SRAM or battery backup, so games relying on that functionality like Super Mario Land 2 or Link's Awakening won't be found here.

The label design suggests that this cart comes from the venerable JY Company, well known for publishing a large chunk of Hummer Team's output on the Famicom. This particular example uses the "Last Bible" menu engine and associated mapper (so-called because the menu music is taken from the Megami Tensei spinoff of the same name). This engine and mapper also appeared on carts from other publishers than JY, and JY themselves also used other mappers and menu types, but the Last Bible menus seem to be largely associated with decent quality, high-capacity multicarts with no or minimal repeats.

Of course, impressive game count or not, you may be wondering: is there actually anything new on this multicart? Or is it just a collection of licensed games and common stuff you could play already? Well: you may be glad to hear this one's Got Some Hacks, at least one of which was fully undumped, and another being a lost "definitive" version of something that's been around in imperfect forms for a while.

I've ripped those and will cover them separately below, but first here's the full multicart ROM, both in raw and GBX formats. Both will work in hhugboy, but for the raw you'll need to select Last Bible multicart mode manually. Other emulators will probably only run the menu.

Next, just to cover off a couple of interesting things I didn't rip: there are two Makon games on here, Super Donkey Kong 3 (listed as Gorila 3) and Sonic 5, but those are 1:1 matches for my previous dump and the common existing dump respectively, so I won't be posting them separately here.

And now onto the new stuff!

Remember Monster Go Go Go? The famous hack of Smurfs' Nightmare, which totally replaces all the graphics, starring an adorable chubby Pikachu who absolutely tanks the game's performance as soon as he appears, and featuring an iconic Celine Dion-inspired opening monologue from Meowth?

Well, what you may not know is that that game is not really a hack of the Game Boy Color Smurfs' Nightmare, but rather the lesser-known 1997 mono Game Boy version, released in Europe only. Colour was added in after the fact, hence its environments largely using a single generic colour palette, reminiscent of mono games operating on the Game Boy Color.

So, if you're the developer of that hack, what do you do when the devs of the Smurfs game then come out with a properly redone colour version of their own? Do you do nothing? Hell no! You partially remake the hack, by inserting the new Pikachu sprite and title screen into the colour Smurfs game, and then... you pretty much leave it at that, sadly. Most of the other new graphics are gone, Gargamel is back in place of Meowth, and the dialogue is all Smurf-based again. It seems like they attempted to replace the Game Over screen too, but evidently didn't actually test it, because it's broken.

This version was given a new title, translating roughly to "Pocket Monsters: Action Chapter", and received a copy-protected single cart release which I recorded a video from many years ago. (And yes the Game Over screen is broken in that version too.) But, thankfully, this multicart version features no protection whatsoever and will run in any emulator or flashcart without issue.

The King of Fighters '97

This one has some history behind it. Simply, it's a hack of Takara's Game Boy port of King of Fighters 96, bringing back characters from KOF 95 that were removed from 96. It's well-done enough, with a couple of nice-looking title logos and an original Super Game Boy border(!) that many have mistaken it for a legitimate game.

The original cart release of KOF 97 was copy protected, but the ROM floating around is cracked by the enigmatic "GYY Game Unlock Team", who also cracked the mono Gowin games. That original version of 97 is missing a few characters from 95/96, though: namely Eiji, Terry, Goenitz and Mr. Karate.

Another dumped revision exists, called King of Fighters '98, which brings back the missing characters, while also lacking any of the signs of removed copy protection seen in GYY's 97 ROM; instead that code resembles its unprotected KOF 96 equivalent (as discovered by Kak). This would mean 98 originated from a different, unprotected build of 97. However, the 98 title logo is of a low standard compared to the professional-looking 97 work, so it seemed unlikely that 98 itself was made by the 97 devs. Instead, it suggested 98 was hacked by some third party from a "missing link" build of 97. And, as you may have guessed by now, this is that version! It's unprotected, has the missing characters in place, and retains the 97 title.

This also appears to be the version that Vast Fame's Super Fighter S, and their subsequent three GBC fighting games, was based on. Those games contain, unused, the graphics for the KOF 97 select screen, complete with the extra characters from this version, which are totally absent from the initial release of 97. This - along with the professional graphics work and use of the "PC Paint Bold" font - points to the possibility of Vast Fame (or at least some staff member/s prior to joining the company) also having created KOF 97.

While this version doesn't use a nonstandard mapper, it's not compatible with the MBC1 used by the original KOF 96, and instead requires an MBC3 or MBC5 equivalent. However, the cartridge type in the header was left as MBC1, and hence the raw dump won't work with most emulators and flashcarts. For that reason I've prepared both a GBX version and a header hack which specify MBC5 instead & should work with anything.

A hack of Adventure Island 2. I ripped this one from another multicart a long time ago, but this version is a little different; it still has the Adventure Island ROM header, and a few other bytes differ. Could be an earlier version.

A pretty well-known hack of Crayon Shin-Chan 4. A few different ROMs of this hack have been circulating for a long time, and this one is the same as "Super Mario 4 (Unl) [p1].gb" except for some inconsequential header bytes. Honestly, I wouldn't consider this worth ripping, if not for the fact that the existing ROMs' origins are obscure, so at least now we have one with some provenance to it. Like a fine wine.

Note the name I've given this ROM is just what I think the title is supposed to be - the title screen reads just "Crayon Shin-chan" in Japanese without a number (and that's if I'm charitable in my reading of the wonky kana, which looks more like クレョンしんちやん than the proper クレヨンしんちゃん), but the multicart menu calls it "Kureyon Shin 6", so I'm assuming it was actually intended as a sixth entry in the series, following up from the five (five!) official Shin-chan Game Boy games.

I remember seeing the Crayon Shin-Chan game a long time ago on Pink Jelly's channel. There seems to be a lot of hacks on multicarts that fly under the radar. Fire Dragon without the GYY logo and Digital Monster 2001 come to mind. I've noticed that those "Full Color SAM GB Collection" seem to have high game counts, and lots of cool hacks on them and appear to also use the "Last Bible" menu (not that I've ever bought one, I've just seen pictures of them from sellers).

Time to add that King of Fighters '97 Bootleg to my collection. Much appreciated <3

Come to think of it, wasn't KOF 97 released in a cart that says Game Amy in the oval at the top? I think I've seen Super Fighters 2001 Alpha and Queen Fighter 2000 released in those, which is another tie between it and Vast Fame

Oh my God i Remember that elusive super Mario 4 bootleg until i know It originates from Shin Chan It had full content including minigames but this One. Removed a lot of It for an hack kinda impressive for its time to be honest It fits as Mario game tough even unofficial.

@bzxgcs That was released on the Bootleg Games Central Forums, however when I mentioned them in an earlier post on this thread I was just discussing the type of cartridge they were released in. Here's a link

So what is GYY Game Unlock Team? A quick search doesn't return anything useful

@Superfish
There used to be a whole bunch of teams of people who would remove the copy protection from old gbc bootlegs. Many of them did not share the ROMs, and example of one would be Sky League. GYY was one of those groups, their ROMs did get to the public eventually, however they edited in their own logo, which was a more common practice back in the day. I’ve actually seen a few pretty old pirate carts that boot up with their logo, so they must have been been around for a long time

and more movies with the exeption of dingo pictures

so where did the mario art on the label comes from

@Superfish
The Game and Watch Gallery 2 for the DMG Gameboy

Oh hey, I also have that Crayon Shin Chan 6 game on one of my Last Bible multicarts. I played it and wondered, "hey wasn't this related to Hello Kitty?"... I assumed just a reskin due to the title screen quality but I guess it was just a hack after all. It's on my 86 in 1 under game #51 (same cart with the PIS Watch GS games)

Is it possible to purchase this cartridge?

not from me sorry