Last time I dumped a multicart containing a game called Kou Dai Guai Shou - Dong Zuo Pian (or Pokemon Action Chapter), which was something like a remake of the well-known older hack "Monster Go! Go! Go!!". But did you know that hack didn't just have a remake, it had a sequel? Maybe if you read that wiki page I just linked to, you knew that. But who has time to read things any more?! You're not even reading this, right?

First, let's backtrack a little bit. The reason I'm able to bring you the sequel today is because I dumped that multicart previously. The original cartridge of Action Chapter was copy protected - so I hadn't done much with it despite owning it for A While - but the multicart was unprotected and used a known mapper, hence I was able to dump the entire multicart and extract that one game. Now, unprotected multicart rips don't always help with reverse engineering original cartridge copy protection, since they're often different recompiled builds of the game, and (at least with my limited skillset and the more complex protection systems) don't necessarily shed any light on how the original protection functioned.

But Action Chapter was different: it had clearly been hacked from the original version, redirecting certain reads to another ROM bank, where a pattern of bytes had been added. This revealed the protection on the original cart was pretty simple; all it was really doing was returning values based on a transformation of the address when ROM banks 80-FF were selected, and if those values were incorrect, the game wouldn't work. (This meant it would've been obvious if I overdumped the game when originally dumping it, which I always now do by habit, but... it was a long time ago). It actually resembles a simplified version of the runtime protection from Vast Fame GBA games, perhaps not coincidentally.

With that knowledge, I was then able to emulate the protection and get a dump from the original Action Chapter cart working. Which is cool! I always prefer to emulate the original protected versions of these games where I can - deprotected hacks can often have unforeseen bugs, even when they originate from "official"(?) sources. But what would be even more cool would be if some other game used this protection, wouldn't it? And so I trawled through a few likely candidates, turning up a lot of misses, until I found... you probably guessed already, Monster Go! Go! II! Of course it stands to reason that another Pokemon hack by the same publishers and (presumably) developers would work the same way, and it totally does. So let's get into it! 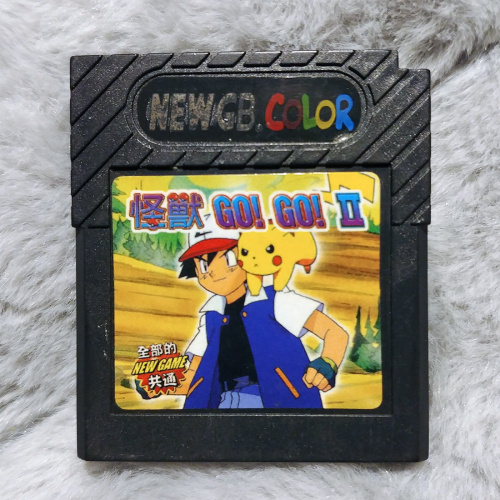 So, you're the developer of that hit Smurfs' Nightmare hack Monster Go! Go! Go!!, in which an obscure Game Boy title was taken, graphically overhauled, colourised, and passed off as an entirely new and halfway-convincing Pokemon platformer for the Game Boy Color. Naturally, your thoughts turn to a sequel. Which little-known game from the depths of the Game Boy's library could serve as the basis for this one? Well, nobody has heard of this "Kirby", right?

Yep: this game is a hack of none other than Kirby's Dream Land 2, the massively-expanded followup to the original round boy's debut outing, bringing his trademark copy powers to the Game Boy for the first time, plus three new animal friends. So maybe they didn't choose an obscure game, but they did choose a very good one.

Unfortunately, this isn't nearly as comprehensive an overhaul as the original Go! Go!, with only the title screen and main Kirby sprite being changed (and even some Kirby sprites remain unaltered, notably when being carried by the owl or fish). You won't find any enemies being replaced by Pokemon here, sadly. In fact, the scope of this hack is much closer to the remade Action Chapter than the original Go! Go!. Perhaps this points to reduced budgets or increased time pressure coming from the "New GB Color" publisher, or maybe the developers just didn't think it was worthwhile drawing a bunch of new graphics for a game that already has a pretty serviceable Pokemon-like vibe. The colourisation is also fairly scant, with most of the game having just one sprite palette and one background palette.

The new Pikachu sprites are still fairly well-done, albeit mostly limited by Kirby's diminutive dimensions, which can't help but feel like a downgrade from the adorably chunky Smurf-sized guy seen in the previous game. But there's obviously something missing from the screenshots so far, isn't there? This is a Kirby game. Kirby has the power to inhale things, hold them in his mouth, spit or swallow, and float through the air. Pikachu can't (usually) do any of those things! So I KNOW you all you freaks out there want to know how they handled that. (don't worry i'm freaks too)

As for how the copy powers look, you can find out for yourself, but they generally range from "fine" to "unchanged if they could get away with it".

And now to the dirty business of ROMs. There are 3 versions; the GBX will work in hhugboy 1.3.1 or later with no extra configuration, the raw will work in the same versions if you set "Unlicensed compatibility mode" to "New GB Color Pokémon hacks", and the MBC5 hack should work in anything. I made the latter the cheap (but safe) way of expanding it to 4MB with the protection pattern hardcoded in the ROM at the address it's read from. 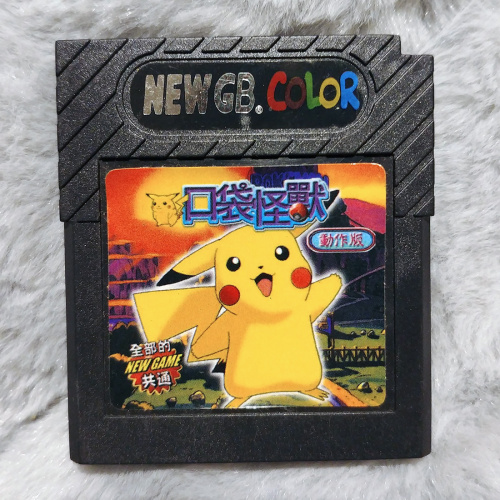 And of course, for completeness' sake, now I need to bring you the original dump of Pokemon Action Chapter! It's exactly the same game as on the multicart, but with copy protection this time. So I'll reuse the same screenshots too.

I noted when dumping the multicart version that half of the ROM was taken up with some random DOS program that may have been in memory on the PC when the game was compiled (since it's really a 512KB game but using a 1MB ROM, a trait inherited from the original Smurfs game), and that's still here in the single cart ROM too.

I actually have two carts of this game, with slightly different labels; the one pictured above, and another which is almost identical with an extra bit of text reading 彩色中文版 (meaning "Colour Chinese Version", pretty misleading since nothing is in Chinese aside from the title screen). The ROMs are ALMOST identical between the two, except for one byte in the unused random-DOS-data portion. So I'm only posting the dump where that byte matches the multicart, since it seems to be the good one, and it doesn't actually matter anyway. If you want to reconstruct the other one, change the 0A at A3B86 to 2A.

The GBX and raw dumps work in hhugboy the same as Go! Go! 2. I'm not posting any deprotection hack of this version since the existing multicart rip already serves that purpose.

Nice work by dumping and fixing this type of bootleg/hack games, certainly the world of pirate games are extremely big (and a bit creepy mysterious too)

they forget the sgb border

Yeah they also didn't change the SGB palette for the title screen.

thanks, forgot to actually link to the page there...

Hey taizou, is there a dump of sonic 6 (hack of speedy gonzalez) and monster go go go! Post this.

those two are widely available already

What about the incredibles

@?
That's undumped. It sometimes shows up on Xianyu if you want to buy a copy and dump it yourself

oh i have that. just wait a bit, no need to buy anything

@taizou
is it for gbc or gba? i'd like to see that

there is a strange existential dread that washes over me when i consider that since bootleg games can just exist via a distributor making their own cart with no way of formal documentation or cataloging, there could still be literal thousands out there that exist in extremely tiny quantities we might never see ever resurface

Yeah but most media is like that, computer software, music, films, arcade games etc. Licensed console games are more of an outlier in how regimented the whole thing is, I suppose it's given people the idea that it's truly possible to collect and preserve all games for a console, but in reality it's as much of a free-for-all as anything else once you step outside those boundaries. All we can do is try our best to document what we can find really.

@Crazy It's for GBC, but maybe they made a GBA one too (since they want to cash-in with any franchise possible with their crappy GBA Digimon reskins)

Thank you Taizou for always dumping these great bootlegs! I stan for life! Do you know if anyone can colorize Disney's the Little Mermaid for original gameboy or if there is one out there it's a straight NES port, so I can't imagine it would be difficult? Unfortunately for me I have no skills just wishes, lol!