It's that time again! Sintax time! It's always Sintax time around here.

Big thanks to Robyn who dumped and scanned all of these! 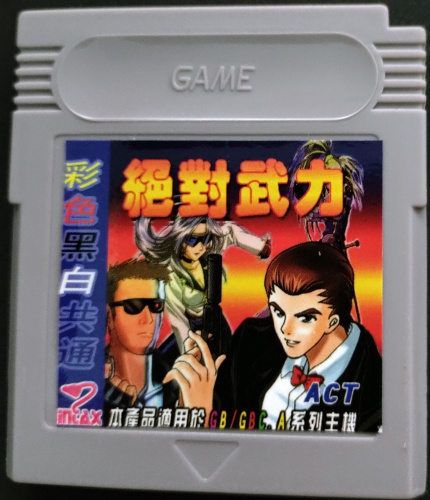 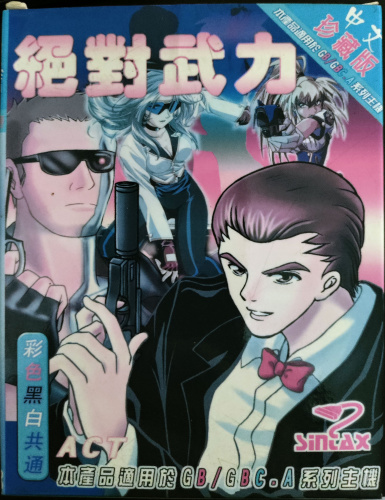 This one is commonly referred to in English as "James Bond" or "007", which makes sense when you look at the intro, tuxedo-wearing spy front and centre on the cover art, "007" graphic on the status bar and game over screen, and so on. But the name Sintax gave it, 絕對武力, literally "absolute force", seems to have nothing to do with James Bond whatsoever, it isn't a Chinese title for any of the Bond films, nor any kind of reference I could figure out. Instead it's the Chinese name for... Counter-Strike. OK sure! Counter-Strike was huge back then and I suppose they wanted to flip their Bond game into a CS one last-minute, similarly to how they disguised a Metroid game as an Ultraman one, only this time they didn't manage to pull together a more appropriate cover. James Bond, a Terminator and two anime girls?! I thought this was Counter-Strike, not Fort-*is killed instantly*

For real though I think the two foreground characters were drawn by an in-house Sintax artist, or at least a freelancer they regularly commissioned, since similarly styled art appears on some of their other releases and doesn't seem to be obviously yanked from somewhere. And I like it, honestly! Is the public ready for an anime Bond? The Queen is dead, anything could happen!

Much like Ultra-Metroid it's a reskin of the not-so-old not-so-reliable Yue Nan Zhan Yi 3, quickly becoming one of late-era Sintax's faves down at the recycling plant. Curiously, the character sprite gives off more Terminator vibes than Bond, which is maybe why they put one on the cover? As if they were originally making a Terminator game, then decided to turn it into a Bond game, then at the absolute last minute decided to rename it as a Counter-Strike game. And Sintax did, at least, file copyrights for 007 and Terminator games, but I don't know if they ever actually released anything under those names for the GBC, or if those filings were just artifacts of this game's confused heritage. 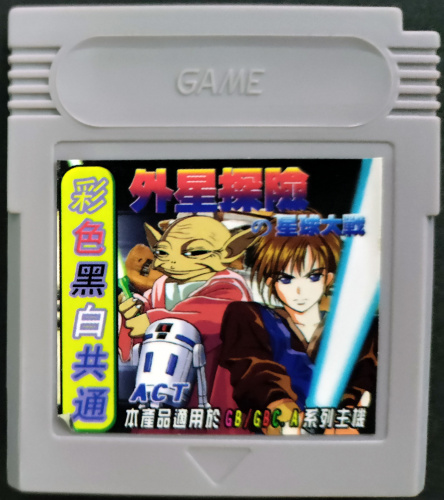 Hey it's a Star War! Do they still make those things?

Here we have yet another shake of the Yue Nan Zhan Yi 3 tree, but someone at Sintax finally got tired of hearing that GBC Lemmings music and decided to rip something else - so we now get to fight through the galaxy to the sounds of... Gradius! Yeah! It's a late Sintax game with a good and appropriate soundtrack!? Miraculous! And again, the cover art seems to be original, from the same artist as the previous game. I really love their smug anime Yoda.

Despite the source game being gun-based, they gave the protagonist here a lightsaber, which shoots out projectiles when they swing it, but I think the result looks pretty cool. 3-way spread-shot lightsabers! Disney are you listening? disclaimer: they might have already done it, I stopped paying attention to Star Wars about 20 years ago

forple also uploaded scans of the box, manual and cart here along with their own dump, so be sure to check those out too! 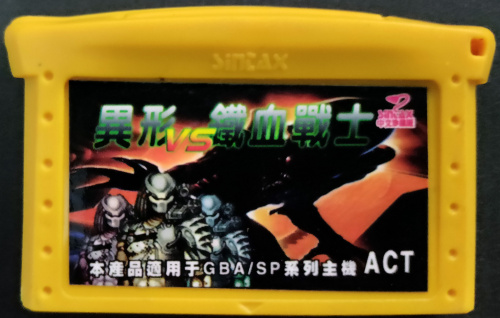 Alien vs Predator, except in this game they're both playable characters, along with a human (who seems to be based on Linn Kurosawa from Capcom's arcade game), and the enemies are all aliens regardless of who you pick. So it's more like alien + predator + human vs other aliens. This is probably the original incarnation of Mo Shou Shi Ji: Zhan Shen, the World of Warcraft game, since that one still has "AVP" in its header. Honestly it's not very good! The first couple of levels are boringly straightforward and the rest are boringly mazelike, each character only has one attack and no powerups, and of course the music is from GBC Lemmings.

Robyn also dumped Chao Ren Te Gong Dui from one of the half-size GBA-like carts, but it matches my dump from last time, so I just added her cart pic to that post.

For some unknown reason, the sprites of the main hero in the Terminator/007 like game looks like the singer of the Gangnam style, heh heh, personal opinion XD

I've just discovered this blog and I wanna give a big THANK YOU for the years of hard work you've put into preserving these games, along with the wealth of information you provide in your write-ups for each game. I've always been incredibly fascinated with bootleg games but somehow never really got into them on the Gameboy systems until now, and it has been an absolute treat digging through this website.

why the fuck does that yoda look like pepe

WE DONT WANT ANYTHING TO DO WITH PEPE THE FROG

This place is bloody AMAZING!
Thank you SO MUCH!
My RG280V will laugh hilariously with these games!

I wonder why the Alien vs Predator game reads gba/sp, tho

Please do mind me, I did not realize these 3 karts were in the same post.
My last question is: "And Sintax did, at least, file copyrights for 007 and Terminator games" was this phrase sarcasm?
Are they truly into copyrights?