The last few posts here have taken us on a rare and exciting trip into Vast Fame town, but, well, nothing lasts forever. Except, of course, for Sintax's game library. So we're back here again, once more taking a dive, Scrooge McDuck like, into that seemingly bottomless pit of brightly-coloured cartridges. Sorry to do this to you in pride month hangover month but my sporadic posting habits on here have long since drifted free of any anchoring in real-world festivities. (Remember when I actually timed releases for Christmas hahahaha yeah)

Today's selection comes from the later era of Sintax's Game Boy Color development, around 2004-2005, firmly in their "decline" period, so don't expect peak quality or anything. There isn't really a theme beyond that, but I did realise after putting this post together that 3 of them have titles referring to some kind of "super man" (超人) in Chinese, so you could pretend that was intentional. 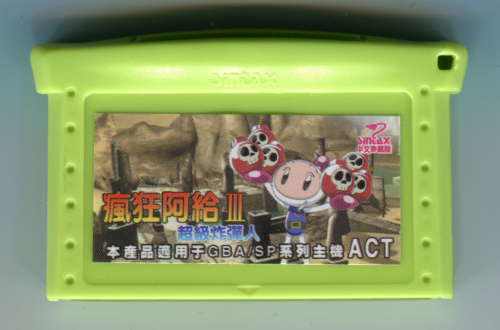 Big thanks to Lady Bluestreak for buying this one! This is one of the more distinctive of Sintax's later efforts, being an honest-to-god Bomberman clone and not just a bad generic platformer or rehash of something from previous years. The main title alludes to "Crazy Arcade", a longstanding online game, and the ingame sprite does seem to resemble its characters, but they also hedged their bets a bit with the label depicting a regular-style Bomberman and a subtitle translating to "Super Bomberman".

(It's also one of their later GBC releases that shipped in GBA-sized carts, mostly seen in the Taiwanese market, meaning it's only physically compatible with GBA & GBA SP despite actually being a GBC game)

The classic Bomberman gameplay is present here, but it comes off a little more exploration-focused since you have these big open scrolling levels and you need to find 3 keys in each to unlock the exit, which you also need to find. It's quite apparent also that, despite the change in gameplay and perspective, this game is at least somewhat based on the same codebase as Sintax's contemporary late platform games, featuring the same odd palette shift when you pause the game, the same GBC Lemmings music and even some leftover graphics from those games in the ROM. 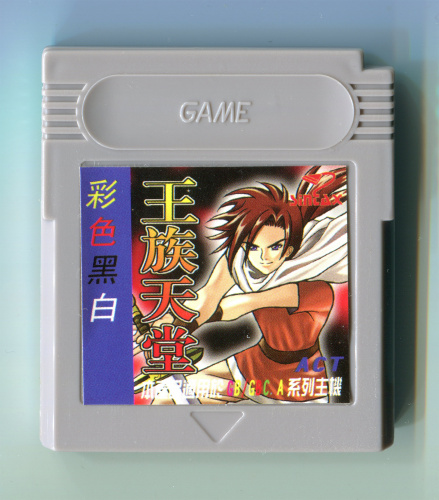 I THINK this one is based on the MMORPG Lineage, which is called 天堂 in Chinese, but I don't know enough about Lineage to substantiate that. Game-wise it's a straight reskin of Sintax' old Star Wars game, which is... alright! 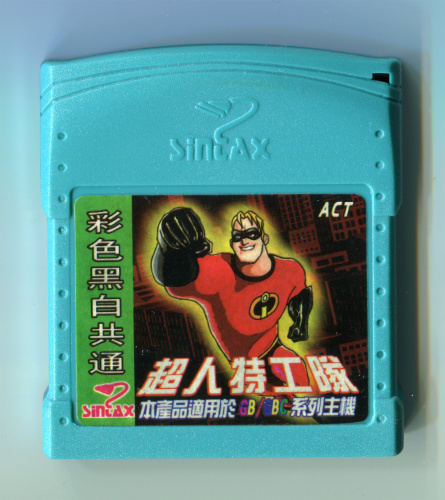 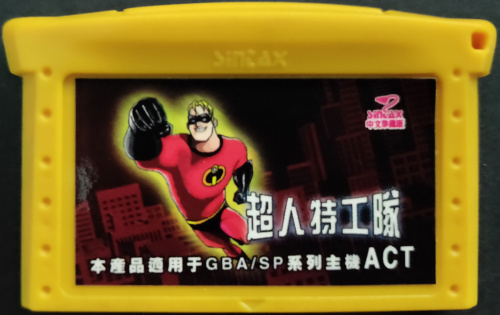 The Incredibles, unfortunately, have been cursed to appear in an iteration of Sintax's Bad Late Platformer Engine, which most commonly hosts Pokemon games like The Original Pokemon Platinum, but has also counted Sonik the Coolhog among its victims. You can pick from 3 characters which all play the same and all have a seemingly non-functional MP gauge, and then you have to search for the exit in a handful of mazelike platformer levels, before fighting a final boss which may or may not be from the movie (which I haven't seen). Naturally GBC Lemmings music plays throughout all of this.

Update 2022-09-19: Added pic of the alternate GBA-sized cart, thanks to Robyn, she also dumped that cart & we confirmed it matches my existing dump 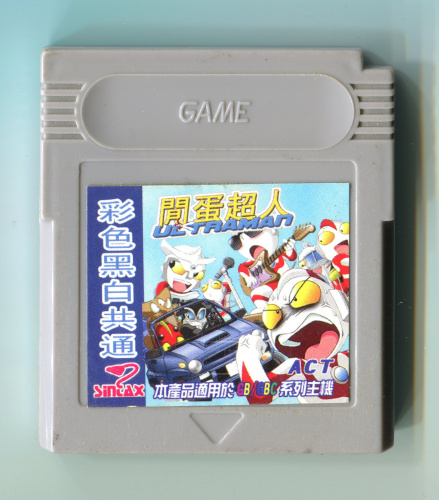 Finally, this is a particularly weird one. It seems pretty obvious that they set out to make a Metroid game here, with an intro and character sprite depicting Samus, and a plot resembling Metroid Fusion's. But at some point they decided to switch gears, for some reason, turning it into "Ultraman" simply by replacing the title screen and nothing else. And if you were hoping they might've at least rehashed their Metroidvania-like Castlevania game for this attempt... well, no, it's just the Metal Slug clone Yue Nan Zhan Yi 3 with the sprites replaced and the level order changed around.

as a wise man once said, there are only two things that are truly endless: the universe and sintax’s library… though we aren’t so sure about the former. in all seriousness, though, i reckon they must’ve been one of, if not the most prolific developer on the game boy for better or worse, possibly even if you take into account their reskinning shenanigans. i’m also surprised with how good not-bomberman seems to be? especially the premise, like, an exploration-driven, fixed-level-layout bomberman clone… surely there must’ve been an official bomberman spinoff that did that, and yet i don’t think there was. their execution also seems to be rather good, even though the collision detection is sometimes a bit wonky when walking vertically (which is kinda hilarious when you remember it’s probably an artifact of its platformer-driven engine not being made with freedom of vertical movement in mind)

@? You mean like Bomberman quest? Also, if you enjoy this Bomberman game, you should check out Sintax’s Crazy Arcade 2. It plays pretty similar. It is available on some Chinese sites, like oldmanemu.net

I actually liked the "Ultraman" game despite being a hack of Yue Nan Zhan Yi 3. It's a decent game compared to other worse games made by Sintax.

@Ankos bomberman quest is just an action RPG with some bomberman elements; what i’m talking about is like a regular bomberman game, but the level layouts are designed instead of randomised and there’s some sort of ✨purpose✨. i think that the closest i can think of is sachen’s puppet knight, but that’s only *less unlicensed* than sintax’s efforts

thank you for the tip, i’d never heard of oldmanemu! googling around, it seems like crazy arcade 2 was subtitled “bomberman jetters”, so i searched for that and… long story short, there’s a GBA anime tie-in game called bomberman jetters: densetsu no bomberman that plays a lot more like that. it’s a much more elaborate game – you need to understand japanese to play it, for instance –, but the gameplay is much closer to classic bomberman than bomberman quest

Mmm... At least the Metroid-esque game look good (at first view) but, being a Sintax game, well, you know the results and the low expectations.