Well this is something I've overlooked for a while, considering this company has been responsible for several of the dumps released here so far, and probably several more to come - the most insanely prolific company ever - yes it's SINTAX!

Sintax Technology Co., Ltd (新特奇科技有限公司) was originally founded in Taichung, Taiwan, around the mid-90s, engaging in various obscure activities including but not limited to educational software and a sex education VCD called "Eden of Sensibility". All of this, I know nothing about. What I do know is that around 2001-2, they set up shop in the Xinhui District of Jiangmen, China, and began cranking out Game Boy titles at a pretty ridiculous rate, based on pretty much every popular game and movie they could think of - Pokemon, Digimon, Metal Gear, Final Fantasy, Spiderman, Lilo & Stitch and many many more all got the Sintax treatment at some point (though Mario notably escaped un-Sintaxed, perhaps out of a wariness of Nintendo). 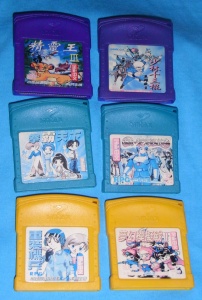 Sintax operated under a few aliases at various points in its life, like "Benco Technology", "Jump Technology" and "Saturn Technology", but this trickery was often undermined by the fact that most (though not all) of their games either came in their own unique style of cart with their logo embossed on it, or started up with a spinning Sintax logo regardless of the name on the label.

Most of their earlier games also carried a "COPYRIGHT © DESIGN BY BBD" notice on the title screen; BBD had previously released a few Game Boy games under its own name (Harry Potter, Metal Slug 2001, Mark of the Wolves among others) which were later re-released by Sintax, and presumably they developed those early Sintax games too. BBD itself has proved to be a pretty elusive company, and I have no idea exactly how they were connected to Sintax, or even if they were actually the same company - I'm sure Gamtec was involved, though.

The games made with BBD were mostly fairly decent, with (usually) good graphics and reasonably-fun gameplay, although unlike Vast Fame they didn't bother composing any of their own music, instead stealing it wholesale from various licensed GB titles. At some point it seems that Sintax then broke their ties with BBD, and continued making games (like this one) in-house; most of the later ones weren't really up to the same level of quality, but some can still be quite fun, if short.

One thing I also discovered recently (which I won't cover in too much detail just yet, there's probably a whole other blog post in it) is that Sintax at some point released a few RPGs developed by the same people as the "Shi Mian Mai Fu" series, but I don't know what the connection is - did Sintax publish another company's games, or was Sintax behind them all along?

As I mentioned, Sintax was extremely prolific, releasing over 100 games all told, but to say they were 100 unique games is pushing it a bit; they had a tendency to take the same engine from one of their previous releases, change the graphics, storyline and (if you were lucky) level layouts, and call it a new game. So maybe 50 or less unique ones? It's still a lot, anyway. It's probably worth mentioning that Sintax released their games fairly consistently in English too, at least for the first year or two of their existence, and even (so I've heard) one or two in Spanish and German. But these are generally much harder to find than the Chinese versions, unfortunately. :(

There's also a series of GBA games which were apparently developed by Sintax, even though their name isn't on any of them; supposedly the first (a Digimon platformer ported from a SNES game) was developed with assistance from Vast Fame, while Sintax made the rest on their own, (naturally) recycling the same engine for each.

After about 2006 Sintax got out of the game business, focusing instead on car stereos and MP4 players and the like, and seemingly those two divisions split at some point; the car stereo side became Honye (possibly still in business, but possibly not) while the MP4 side used the name "Penking" for a while but still operated as Sintax, releasing a sort of obscure Dingoo-esque device around 2009 as "Sintax Digital" (image at right from lightake, who once sold it, if you couldn't tell). This, I guess, was their last-ditch attempt to save the company, because they don't seem to have done anything else since then; it's quite hard to tell in China sometimes, but I think that was the end of Sintax. Still, they've left behind quite a legacy.

Great article. Should be put onto wiki or something.
It's part of game history. Nice job, Taizou!

thanks! I'm sure Wikipedia wouldn't consider it "notable" enough, but if anyone wants to put some of the info in the Bootleg Games Wiki article (http://bootleggames.wikia.com/wiki/Sintax), they're welcome to.

@Taizou
Sintax's website is on several of your pictures of cases for their games. :D