got another game from one of my old videos today - in Chinese it's known as Chao Jin Hua: Shu Ma Bao Long D-3 (超進化 數碼寶貝D-3) but for short I'll call it Digimon D-3, which also happens to be the name of the official English version. It's a fairly okay averageish platformer originally published by SKOB but developed probably by BBD or something. 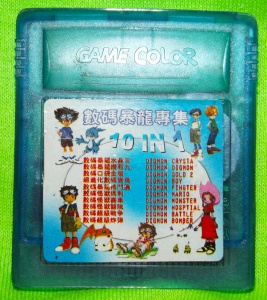 This was ripped from a 10 in 1 multicart, called "數碼暴龍專集 10 in 1" - as the multicart is only 4mb I was able to dump the whole thing (the Vast Fame ones are larger than that and use some kind of bankswitching which my dumping hardware can't replicate at the moment), so just for completeness I'm posting that as well, but note that it isn't properly emulated in anything. All the other games on it are identical to existing dumps, but it's an interesting cart nonetheless:

More random things noticed while browsing around the ROM:

* Boot logo for this one is "Yiutoudz", which seems to have exclusively been used in games published by SKOB.

* As in several other SKOB games, some ASCII strings from a Gamtec dev kit appear in the ROM.

* For some reason, there are also some leftover text strings from King of Fighters '96, including the opening scroll. At least it's not Harvest Moon, for once?

I've seen KOF stuff in other BBD related games, like Metal Slug 2001 - maybe it has something to do with their fighting games?

..actually its in KOF R-2 and Mark of the Wolves as well. AND Super Fighter S/99 by V.Fame but I guess that's to be expected.

Hey just wondering do you have another digimon game like this? I used to have a chinese digimon game I played as a kid on my gbc but ive lost it and ive always wanted to play it again and I thought it was this one but this one seems a bit different. The one I played seems a bit more well made

I'm planning to make a video gameplay about the games in the multicart, but it looks like the rom keeps freezing when I try to play any of the games. Can you upload a fixed one, please?

PD: Thank you for the game dumps.

KAGE-008 already mentioned this on another post, but for the record the multicart's mapper isn't emulated in any emulator (that I know of), but all the games are dumped separately.

@Taizou
Can I see the inside of the cart? Please?

nah, its got a security seal on it, i don't like to break those unless i have a really good reason

@Taizou
I've been forgetting to ask if you find an original Sintax version of Digimon D-3. The version that is on the multicart seems to be a Li-Cheng modification. Hell, even I think the multicart is made by Li Cheng, because of their distinctive coding that they number a lot around numbers 10, usually putting WAY TOO MANY corrupted stops in the programming, causing their ROMs not to work as well, sometimes, like here, I'm that's somewhat making this multicart ROM not work, that and sending of bad addresses. Yeah, I personally think that the other bootleg game companies seem to program better than Li Cheng. I guess the learning of programming is kinda different from the Mainland China (where Li Cheng is at), vs. how it is at Taiwan. O_o I do ask of this, because you may think the ROM works, but on Level 7, it crashes alot. Either ways, I would still prefer Sintax's programming.

@chowdit i thought i replied to this but i didn't, oh well. the original version of this game was published by skob & yeah i've never had any luck dumping their games so far.

@Taizou
Well, it looks like it's mostly Sintax, and/or BBD. Who knows, SKOB could be an alias to Sintax, when making fighting games. It's weird this would be a SKOB game, with that being the case. o_O

well SKOB is/was definitely independent from Sintax, but some of the GBC games they published seem to have been developed by BBD or Sintax or whoever (including this one). Some others were developed by a different team entirely though, like their Super Robot Wars games & Digimon RPGs.

taizou, will you ever ban these spam bots? Me not included.

i banned everyone who was spamming in the past, now you're the only one doing it