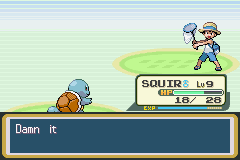 Well Done! I hope mGBA can support the SRAM chip!

currently it can't, it probably depends on me adding support for it since i'm the one with the cart

That’s pretty cool. I once saw a box that resembled that cart’s sticker, but the cart that went with it had a German flag on it, and the seller said it was in German

Oh that's cool, so maybe they made a German translation too...

this also got dumped by andwhyisit in 2009, it's available in patch form here: https://forum.telefang.net/viewtopic.php?f=27&t=1013
thanks to Sanqui for the heads up on that one, i had no idea!

What codes did you overwrite from the Nintendo logo? Just out of curiosity

@taizou
I've noticed that there have been a lot of pirate carts for the gba that have IDs starting with E6 or E12. I was wondering if you knew if there was a major manufacturer of those, or if it is just coincidence that they have similar IDs

@anewkindofscience - It's almost certainly the same manufacturer, yeah. I don't know the manufacturer's name though.

Two dumb questions:
1. yySintax told me that he sold you a James Bond 007 cartridge. When will you dump and release it?
2. Will you merge your Neo Fuji dumps into this site?

<del>3. When do you usually be active on the internet?</del>

2. maybe. they aren't very significant though, just an existing homebrew game and a hacked pirate copy.. but maybe

Turns out there is another different leaf green bootleg translation

i have this cartridge, unfortunately though it freezes/restarts when i try to select the first pokemon. i was looking for a rom to play it on emulator. luckily i got your post! thanks for the dump. i wish that it could be saved normally without savestates. btw, here is a link to the chinese version https://chinesetranslationsandromhacks.blogspot.com/2018/02/gba-pokemon-leafgreen-old.html